Members of the OUTLAWS Motorcycle Gang Are Indicted By Grand Jury 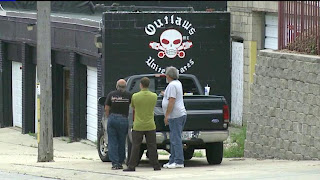 Twenty-three members of the Outlaws motorcycle gang have been indicted by a grand jury in Virginia on charges they were part of a complex criminal enterprise that engaged in assaults, kidnapping, drug dealing, illegal gambling and even attempted murder, federal authorities announced Tuesday.

Among those charged is Mark Steven Fiel, known as "Snuff," 59, who officials say is president of the Outlaws' Manassas/Shenandoah Valley chapter. Four other alleged members of that Virginia chapter were indicted. So was Jack Rosga, a.k.a. "Milwaukee Jack," 53, the Outlaws' national boss.

The 50-page indictment, handed up Thursday and unsealed Tuesday, provides a window into what authorities say is a highly organized and violent gang that operates using a well-defined chain of command and a strict code.

Members, who become part of the gang only by a unanimous chapter vote that follows a probationary period, earn patches to show their loyalty. They pay dues, can be taxed to cover a member's legal costs and may be beaten if they break club rules, according to the indictment.

The Outlaws' "entire environment revolves around violence," said Neil H. MacBride, U.S. attorney for the Eastern District of Virginia, where the indictment was secured.

He said authorities have been working to dismantle the gang, and court papers show that some undercover officers have infiltrated its ranks.

Authorities allege that the Outlaws, with Rosga at the helm, were trying to expand their influence nationwide and targeted rival gangs, especially Hells Angels. Gang leaders in several states, including Virginia, Wisconsin, Maine, Montana, North Carolina, South Carolina and Tennessee were charged.

The indictment lays out violent incidents across the country:

In 2005, Outlaws ran a rival gang member who was on a motorcycle off the road in New Hampshire and left him injured after taking his vest, the indictment states. script>

Three members followed and shot a Hells Angels member in Maine in October 2009, seriously injuring him. In December, a member kidnapped and threatened an undercover Knoxville, Tenn., officer who was posing as a gang member.

Court papers say Fiel and others launched a Virginia chapter in 2006, even reaching an agreement with the Pagans motorcycle gang to share the territory.

In one of the Virginia chapter's early acts, court papers say, members planned a "show of force" against Hells Angels members, court papers say. Outlaw members showed up at the March 2006 Cycle Expo in Richmond prepared for a "violent engagement." But law enforcement got wind of the potential problem and refused to let Outlaws and Pagans inside, the papers say.

Outlaw members take pride in breaking the law, according to the indictment. Members can earn a "One Percent" patch, a decoration created in a response to a 1940s proclamation by the American Motorcycle Association that 99 percent of motorcycle club members are law-abiding. Outlaws with the patch are in the "other one percent," the indictment says.

According to the indictment, in November 2008, one Virginia member punched a black man at a Fredericksburg bar, simply because of his race. The Outlaw called the man to his table and asked for a light, the indictment states. When the man obliged, the Outlaw struck him

Outlaw members also are accused of planning to blow up a Richmond tattoo shop owned by a Hells Angel member, keeping guns in a clubhouse in Manassas and dealing drugs.