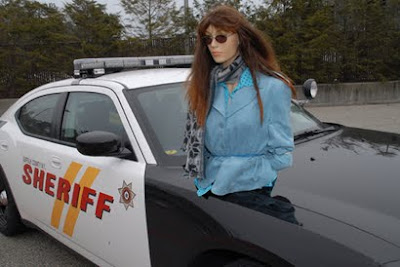 On Tuesday a 61 year old driver
was stopped while driving in the HOV lane on the Long Island Expressway.

An alert deputy sheriff noticed that the "other occupant" in the vehicle with with long brown hair, wearing a scarf and jacket, was also wearing sunglasses. The cars visor had also been pulled down to protect the passenger from the sun.

What made the Deputy Sheriff Robert Howard suspicious? It was an overcast day. The officer pulled the vehicle over to find the second passenger was a life sized mannequin!

The half body mannequin was fully dressed in a long, dark wig, scarf, blazer and matching shirt with a belt.