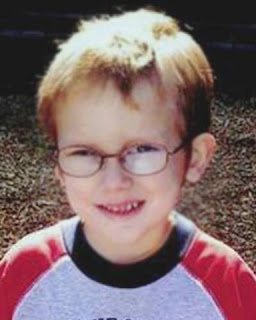 How do small children "fall through the cracks"? This child made it clear that he did not want to go stay with his mother. And why, oh, why do adults do these terrible, nightmarish things to their OWN innocent children.......or even make excuses for why it happened?!! This child was sent to Utah by a Virginia judge even though the child did not want to go...............

SALT LAKE CITY (AP) - The Utah man held in the slaying of his 4-year-old stepson beat him for days before the boy died, then used a hammer to disfigure his face and teeth before burying his body in the mountains, according to police records released late Wednesday.

The body of Ethan Stacy, wrapped in plastic, was unearthed by police Tuesday.

Interview summaries filed by Layton police detectives documented increasingly harsh treatment of the boy during his short time in Utah. A Virginia judge had sent the boy to Layton for a summer visit with his mother just 10 days before his death, police said.

Investigators said they obtained photographs and video images of Ethan's worsening condition from his mother's cell phone, starting more than a week ago.

The injuries resulted from the stepfather, Nathanael Sloop, "engaging in a systematic and progressively more violent pattern of abuse toward Ethan," detectives wrote in interview summaries. The documents say Sloop was angry with the child and "tried everything" to discipline him; however, they don't say why the boy was being disciplined.

Sloop, 31, acknowledged hitting the boy, which caused his face to swell, and leaving him in a locked bedroom May 6 while the couple went to get married in Farmington, about 10 miles away, according to the probable cause statements used to support arrest warrants and detention in jail.

Sloop and the boy's mother, Stephanie Sloop, 27, feared his injuries would alert authorities if they took him along to the courthouse wedding, the documents state.

"This pattern of behavior and abuse was done in a manner that was recklessly indifferent to the child's welfare," police wrote.

Stephanie Sloop told police she did not seek medical help for Ethan because she was afraid Nathanael Sloop "would harm her," Detective Brooke Plotnick wrote.

The couple told police they found Ethan dead in his bed Sunday morning, and that Nathanael Sloop buried him later that day.

Stephanie Sloop told investigators she bought two cans of lighter fluid for Nathanael Sloop to burn the body before it was buried. The reports didn't say whether that was actually done.

The stepfather disfigured the boy's face and teeth "in an effort to defeat or delay identification," detectives concluded in their reports.

Prosecutors said they expect to file charges against the couple Friday. Nathanael Sloop was arrested on suspicion of aggravated murder. He and the mother face additional charges of desecration of a corpse, along with felony child abuse and obstruction of justice, police said.

The Sloops are being held at the Davis County jail.

Attorney Richard Gallegos, who has represented Nathanael Sloop in previous criminal cases, did not return a message Wednesday. It was unknown if Stephanie Sloop had an attorney.

Nobody answered a phone at the Sloops' apartment Wednesday, and a message wasn't returned.

Stephanie Sloop initially told officers that Ethan wandered away from their apartment complex late Monday, but that was just a ruse aimed at covering the couple's tracks, Lt. Garret Atkin said.

Police searched overnight and said that by midday Tuesday, the Sloops had revealed the location of Ethan's body. The search then moved 20 miles away to a spot off a wooded trail in Wolf Canyon, which borders the Powder Mountain ski resort, about 40 miles northeast of Salt Lake City.

A relative says Ethan didn't want to spend the summer with his mother.

"Ethan did not want to even talk to (his mother) on the phone. She'd call and he'd say, 'I don't want to talk to her,"' Freida Stacy, Joe G. Stacy's stepmother, told the Deseret News of Salt Lake City.

Stephanie Sloop told police Ethan was vomiting, lethargic and refusing to eat for three days before his death. She also said that on Friday, she found Ethan badly burned from his feet to his buttocks from hot bath water, and that she suspected Nathanael Sloop was responsible.

At another point, the couple forced the child to drink two 16-ounce bottles of water, a 16-ounce bottle of Kool-Aid and a glass of orange juice over two hours, police said. They also gave him Motrin and Benadryl to ease his facial swelling and pain.

Utah State Courts records show that between 2000 and 2003, Nathanael Sloop had several convictions, including for criminal mischief, disorderly conduct and drug possession. In 2003, he served 30 days in jail for one drug possession charge and received a six-month suspended sentence for another.

No criminal history was found for Stephanie Sloop.