Has Another Seal Been Found??? 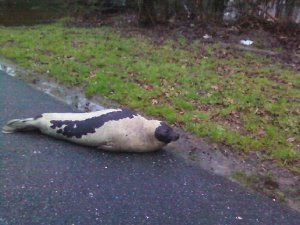 WESR has received confirmed reports that a live male seal was found on the Eastern Shore.

Lt. Goga of the Accomack County Sheriff's Department told WESR that a live seal was found in Stockton, just north of Greenbackville, VA. The seal is believed to have traveled up Chincoteague Bay following food. The seal was resting along the edge of the road near Big Mill Pond when it was spotted by motorists.

The recent high tides are believed to have been the reason the seal made it that far inland. The 80 pund seal was placed into a crate and relocated to Assateague Island unharmed.