ACCOMAC — An Accomack County Sheriff’s Office investigator resigned after being charged with 10 counts of stealing energy drinks from a Chincoteague Island convenience store.

Jerry Spencer Tarr, 45, of Chincoteague, was arrested and released Monday after a State Police investigation.

He resigned from his position the same day, said Sheriff Larry Giddens.

“It’s one of those things that you can’t really figure out,” Giddens said.

Court records show the incidents happened between Jan. 19 and Feb. 1.

Tarr will be arraigned at 1:30 p.m. March 9 in Accomack General District Court.

Tarr had been employed by the sheriff’s office for three months. He formerly worked for the Chincoteague Police Department.

Tarr made headlines in 2006 after he was forced to retire from the Coast Guard after being charged with disobeying orders from a superior when he aided a boat towing an abandoned fishing vessel away from private property and into the Chincoteague Channel.

Witnesses said the vessel in tow had lost control and was in danger of damaging property.

Giddens said Tarr’s work with the sheriff’s office had been well-received.

“He’d done a great job for us,” he said. “He was a great investigator.”

ACCOMACK — A sheriff's deputy on the Eastern Shore has been charged with multiple counts of shoplifting after state police say he repeatedly stole large quantities of Five Hour Energy drinks.

Anaya said Tarr was investigated and charged with the crimes.
www.dailypress.com
Posted by jmmb at 7:53 AM 1 comment:

Embarrassment Might Just Be The Right Punishment ~ For Some

When 18-year-old “Bert” came out the doors of the new Halloween Express store in the Rio Hill Shopping Center, he never expected to be wearing a Sesame Street character costume and holding a sign that admitted he was caught shoplifting from the store. 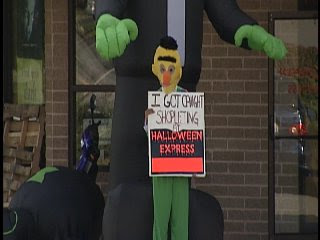 As funny as the Bert costume may seem, it's no laughing matter for those involved. Despite the presence of surveillance cameras at Halloween Express, the young man decided to walk up to the counter, grab a pair of fangs and walk off.
"He walked off and he's looking at merchandise. Once he got to [a corner of the store], he slipped them into his pocket and walked on around the corner," said store owner, Andrew Perry.

Police agreed to let the Perry and the teen settle the shoplifting crime by having the 18-year-old wear the Bert costume and hold the sign of guilt in shifts for a total of six hours. However, if the young man does not show up for the rest of punishment on Saturday, the store will press charges.

Perry was also gracious enough to leave the young man's identity concealed by the costume, acknowledging that a petty theft charge could ruin his life.

"It could mess up the rest of his life. You go to get a job, it shows you shoplift, no-one wants someone with a criminal background. So, I thought it be nice to get the word out and take care of it," said Perry.

Shoppers agree the deal is more than fair. While the 18-year-old getting busted and having to pay it off wearing the costume and sign is quite humorous, they say it also serves a purpose without costing the public.

“I would much rather wear a costume, than have charges against me,” said Ellen Sonifrank.

If he gets a little bit of embarrassment out of it may be he'll learn a better lesson from it,” added Misty Turner.

As the Sesame Street character stands alone out in front of the seasonal store in Albemarle County, his message to anyone else thinking about getting sticky fingers.