See picture below after reading the short story.

A man had a TV on in his office when the news of the military base shootings came on. The husband of one of his employees was stationed there. He called her into his office and the minute he told her what was going on, she got a text message from her husband saying, "I am okay."

The cell phone started ringing right after that. It was an ER nurse. She said , "I'm the one who just sent you a text, not your husband."She thought the message would be comforting, but she immediately knew she had to let the wife know what was going on.

She said, "I am sorry but your husband has been shot 4 times and he is in surgery."


The wife left Southern Clinic in Dothan and drove allnight.

Miraculously, here is the photo I just received from my brother that was taken today in the hospital room.

He is awake and will recover.

His wife, who lives in Dothan , made it to Ft. Hood about the time he was waking up. He had visitors. It was NOT Obama!!! 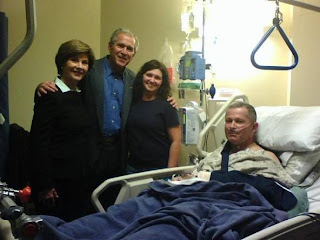 This is not the kind of story that is carried on the state-controlled media. The Bushes are
"real people."
Posted by shorethingphoto at 9:46 PM