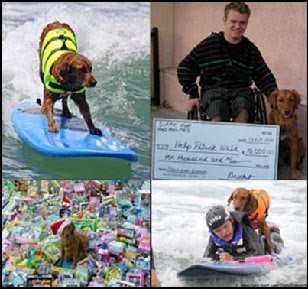 Her first fundraiser was for quadriplegic surfer, Patrick Ivison where she raised over $10,000 which helped pay for his medical bills.

In addition, one of her sponsors, The Rose Foundation awarded Patrick a grant to fund three more years of his physical therapy.

At the conclusion of Ricochet's very successful fundraiser for Patrick, a video entitled "From Service Dog to SURFice Dog" was posted to YouTube.

The video showcases Ricochet's inspiring journey from service dog candidate, to realizing she wasn't entirely suited for the job, to disappointment, to finding a new direction.

Although the video is about a dog, and her trainer, there are several life lessons which can be applied to anyone, and anything.  People from all walks of life are being inspired by the message of acceptance, adjusting expectations, focusing on ability, and celebrating amazing outcomes.

The inspirational video has spurred emotion on many different levels, and each person who watches seems to find their own personal message, moving them to tears.

The video also spurred an influx of donations from all over the world including Canada, Taiwan, Japan, The Netherlands, and New Zealand.  As a result, Ricochet was able to take $3550 on a shopping spree to Toys R Us, where she purchased toys for 650 children in hospitals and domestic violence shelters.

At the conclusion of the toy drive, the video views were still increasing by the tens of thousands daily, and donations continued to be generated.  So Ricochet began allocating the funds toward therapies for six year old Ian McFarland who suffered a traumatic brain injury in a horrific car accident that claimed the lives of his parents.

Ricochet, who turned two years old at the end of January, has accomplished a great deal in her young life.  Last week, donations from the video reached $10,000.  These donations coupled with the $10,000 she raised for Patrick brings the total donation milestone to $20,000 at this six month juncture.  She's also touching millions of lives all over the world with her inspirational video.  A double overhead indeed!