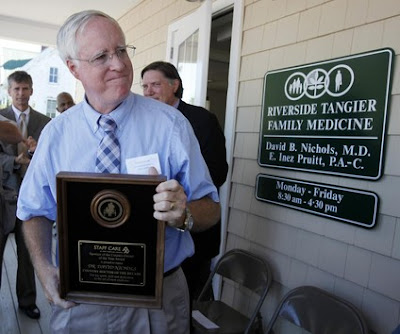 TANGIER ISLAND -- The ribbon-cutting on a new, state-of-the-art medical center yesterday turned out to be one of the biggest events in the small island's history.

The much-anticipated occasion also turned out to be much more than the dedication of a building.

"It's a pretty big day for Tangier," said island resident Bruce Gordy, as he hustled to close the Tangier Island History Museum early so he could find a good vantage point for the ceremony. "It's great, but it's sad, too."

The joy and pride stem from the grand opening of the $1.4 million health center that replaces a cramped, dilapidated clinic that has served the island for more than 50 years.

The sadness surrounds Dr. David Nichols, 62, the White Stone physician who has filled the role of primary physician for Tangier's 525 residents, traveling to the island on his day off every week for 31 years. Last month, only weeks before he would begin seeing patients in a new facility that had been his dream for years, he was diagnosed with terminal cancer. He said he could have only a few months to live.

Yesterday's festivities were bittersweet, said Jimmie Carter, the Northern Neck developer and friend and patient of Nichols' who spearheaded the public-private partnership that built the center and established a foundation that will help ensure high-quality health care for islanders for years to come.

Under a cloudless sky and a relentless sun, hundreds gathered outside the new facility -- christened the David B. Nichols Health Center -- to cheer the building and honor its namesake.

It's a testament to the affection for Nichols that on such a hot day the crowd filled the narrow lanes around the building in folding chairs and the island's ubiquitous golf carts -- patients and former patients, islanders and mainlanders who came across the Chesapeake Bay by ferry or flew in by small plane or helicopter, making Tangier's small airfield look like a major airport for at least a day.

The center's front porch was filled with local and state officials, including Gov. Bob McDonnell and Rep. Robert J. Wittman, R-1st, who represents the island in Washington. McDonnell said he made the trip simply "to shower more love" on Nichols.

In welcoming everyone, Tangier Mayor James "Ooker" Eskridge stood at the top of the steps of the new clinic and said, "The Bible tells about God using certain people for certain jobs at certain times. Dr. Nichols, we appreciate all you've done and all you're doing, and we love you."

Schoolchildren sang "This Land Is Your Land." Representatives of Staff Care, the organization that chose Nichols as "Country Doctor of the Year" in 2006, came from Texas to present Nichols with its first "Country Doctor of the Decade" award. Elected officials bestowed resolutions and commendations upon him. One declared Nichols "A True Tangierman for Life." 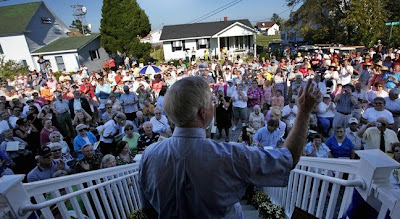 Inez Pruitt, the Tangier-born physician assistant who was mentored and inspired by Nichols to follow her calling, praised his commitment and compassion and said she is "the most blessed woman in the world."
"I wouldn't change a thing," she said, "except for time -- and more of it."

After the ceremony, the crowd meandered over to the island's schoolhouse for a reception that was more of a community picnic -- with tables laden with soft-shell crabs, clam fritters and ham, as well as homemade salads and cakes. The cups of iced tea went fast.

"All these people," marveled Hedy Bowden, who was among the kitchen volunteers scurrying about replacing empty bowls and platters.

Bowden, 63, grew up on the island and was trying to remember a bigger community event but couldn't.

"This is the biggest I've seen," she said.

Throughout the day, the cheers, laughter and posing for photographs inevitably were mixed with hugs and tears. Anyone who was asked what Nichols has meant to the island invariably said, "Everything."

When it came his turn to talk, Nichols said not to worry.

"While I will leave you in body," Nichols told the gathering, his eyes red and his voice catching, "I will never leave you in spirit.