This wonderful article has been sent to PPE by an astute reader; Enjoy

When Cuban President Fulgencio Batista escaped Cuba as Fidel Castro's guerrilla forces seized control of the country Pocomoke's WDVM listeners got the news from Eddie Matherly: "Batista high-tailed it out of Cuba this morning."

The West Virginia native, "Momma's Country Youngin" (also known as "Mommy's Country Youngin"), was a popular radio voice on the lower Eastern Shore in the mid and late 1950's with his "Hits From The Hills" morning show and his "Delmarva Jamboree" afternoon show on WDVM. During 1959 he, and the shows, moved to WICO in Salisbury. Matherly was on the road as well with his 'Hoedowners" making frequent appearances throughout the area. Many of them were broadcast live. 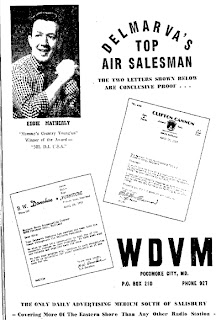 CLICK IMAGE TO ENLARGE
A 1959 ad advertised a Free Jam Session from The Starlight Room of Salisbury's Northwood Bar featuring Eddie Matherly and the entire cast of the Delmarva Jamboree broadcasting over WDVM. When Patsy Cline performed at the Northwood, Matherly was on the bill as well. Years later he would be a pallbearer at Patsy Cline's funeral.
He was voted "Mr. Country DJ USA" by the Grand Ole Opry in 1958.
Matherly left the Eastern Shore in 1960.

He was with KRES in Moberly, Missouri when it went on the air in 1961. Matherly moved on to WKCW in Warrenton, Va. He promoted country music talent in the Northern Virginia area and managed a country group called "The Country Kings." He also tried his hand at politics with a run for a seat in the state senate as a write in candidate.

In August of 1963 the finals of the National Championships Of Country Music were held in Warrenton, Va. Eddie Matherly was master of ceremonies. A recording of the event is archived by The American Folk Life Center (AFC Number 1987/029).

In October, 1964, less than a month before his 37th birthday Eddie Matherly died of a heart attack at a Washington, D.C motel where he and his wife were staying. He had earlier served as master of ceremonies at a show at the Washington Coliseum. At the time of his death he was General Manager of WKCW. News of Matherly's death was carried in newspapers across the country.

AN INTERVIEW WITH MUSICIAN, LEON RECTOR:

"The reason Little Jimmy Dickens came to Warrenton, to attend Eddie Matherly's funeral," Leon Rector explained to me, during a telephone interview, "…along with numerous other members of the Grand Ole Opry, was because Eddie Matherly was a D.J. and promoter in the [Fauquier County, Prince William County, Northern Virginia] area."

Rector went on to say, "Eddie Matherly was the reason I got to perform behind…back-up…so many famous musicians who toured through here. He got a lot of work for musicians in this area, even the ones from Nashville. That's why there was such a big crowd, from the Grand Ole Opry, at Eddie's funeral."

Gosh, I remember Eddie! When WDVM started they were in a little cinder block building in the field behind where Choppy Layton now lives. I think they went through some hard financial times, maybe even went off the air for a bit. Anyway, they moved to the current location in the late '50s and eventually changed their call sign to WDMV. Then began the era of Choppy Layton and Wayne Powell; I think George Hack, formerly of WBOC, even worked there for a while. And of course the infamous Johnny Walker of the spy family. He was either the father or uncle of the Navy petty officer of the same name who was arrested for spying for the Russians.

Johnny Walker also sold advertising for the radio station. He was the father of the Navy petty officer that spied for the Russians. I remember Mr. Walker very well. He also had a very special daughter. Quite a personable man and well liked back in the day.

B. W. Donahoe Furniture was at the south end of Princess Anne and their slogan was "A little out of the way, a whole lot less to pay." Clifton Cannon Ford had a lot at the intersection of 13 & 113 way back then. They were eventually sold to Bill Miller and Carlton Massey and became Miller-Massey Ford. Bill Miller moved to Ocean City and it became Carlton Massey Ford.

More great comments about memories of Pocomoke and the area.