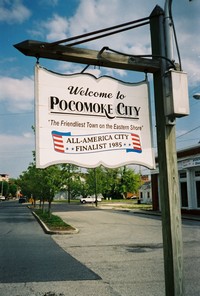 POCOMOKE CITY -- With the Friday deadline having passed with no opposition in the three open Pocomoke City Council slots, the body is now set for the coming year.


The final council member to announce his candidacy was Fifth District incumbent Councilman Robert Clarke. He joins newcomer George Tasker in the First District and incumbent Tracey Cottman in the Fourth District as members who will be sworn in at the meeting in April.
Because only one candidate per district filed to run, there won't be an election, which would have been held the first Tuesday in April.

Clarke and Cottman are serving again for full three-year terms. Tasker's term will only be for one year, which is to fill the remainder of the late Bob Hawkins' term. Should Tasker choose to run again, he may do so when the District 1 seat officially comes up for election next April.

Hawkins, 92, died Nov. 8, 2011, from injuries suffered in a car accident. He had been a sitting Pocomoke City councilman since 1988, and was an active and beloved member of the community.

Mayor Bruce Morrison said town leaders decided upon Hawkins' death that his replacement would only fulfill the remainder of his term.

"And that gives them the opportunity to find out whether they like it or not," Morrison said.


When asked why he thought no other candidates decided to run, he said it's because "things are going great, and we have a great city council and people are very happy with that."
He said, "That's the only reason I can think of why no other people would run, because it was very well publicized in the papers. Everybody knows the deadline."

Perhaps nobody else wanted to take the job for one year, Morrison added, except for Tasker.

Calling himself a fiscal conservative, Clarke is looking for efficiencies of scale as a way to create savings for the town. He cites the idea of Worcester County handling the property tax billing for the town, along with the county bills as an example.

Clarke said he is pleased with the performance of new police Chief Kelvin Sewell. There are more foot patrols in town and with better weather this spring, there will be bike patrols. Clarke also hopes morale will improve among officers once they move into their new headquarters this spring.

Clarke said he has received several complaints about speeding on Cedar Street, and he said one way to correct this would be to have four-way stop signs every three or four blocks.

He said he would also like to see more sidewalks installed, especially on Cedar Street, as it is a major thoroughfare for students attending the schools.

Clarke said the new sewage plant is almost complete and on line. With the charges for collection of sewage from haulers, the town has realized several hundred thousands of dollars from the haulers. The water and sewer fund is almost balanced, with a capacity for growth.

Pocomoke City has lost a major share of transportation funds coming from the state, and Clarke said he hopes the Maryland Municipal League is successful in having at least some of the funds restored. But this loss affects the ability of the town to repair and repave city streets.