Judged Just Because of "Who" They Are 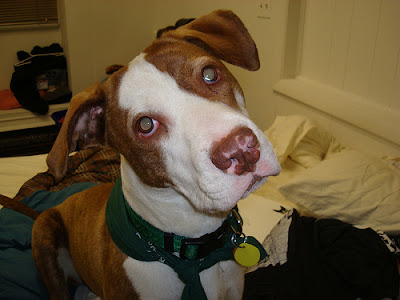 All pit bulls to be considered dangerous under court ruling

Pit bulls are inherently dangerous animals, the state's highest court has ruled, a decision that could lead to stiff penalties for people found responsible in attacks — even if the dogs have never been violent before.


A decision by the Maryland Court of Appeals, issued this week, distinguishes pit bulls and mixed breeds from other kinds of dogs. In the past, a victim intending to file a lawsuit after a dog attack had to prove that a dog's owner knew it had a history of being dangerous. Now, showing that the owner or landlord knew a dog is part pit bull would be sufficient for a claim.
"It is no longer necessary to prove that the particular pit bull or pit bulls are dangerous," the court ruled Thursday.

The case stems from a 2007 attack on a child in Towson that led several local governments to reconsider the laws governing pit bulls. The animals are banned in Prince George's County.

But some who oppose the ruling argue that a dog's breed is not a reliable way to predict whether the animal might become violent. They worry that the decision will make it more difficult for pit bull owners to find housing, and discourage others from adopting the dogs.

In a dissenting opinion, one justice said the decision establishes a troublesome precedent.


"Now, it appears, the issue of whether a dog is harmless, or the owner or landlord has any reason to know that the dog is dangerous, is irrelevant to the standard of strict liability," wrote Judge Clayton Greene Jr.
The decision is in response to a Baltimore County Circuit Court decision in the case of 10-year-old Dominic Solesky, who was attacked by a neighbor's pit bill in 2007.

After the attack, Dominic's family sued the dog owner's landlord, Dorothy M. Tracey. The Circuit Court judge threw out the claim, ruling there was no evidence that Tracey had been negligent.
The Court of Special Appeals overturned the judge's decision, and the Court of Appeals affirmed that ruling Thursday. The case will now head back to trial.
Pauline Houliaras, president of B-More Dog, which formed in 2007 to fight anti-pit bull legislation in Baltimore County, said the group is "extremely disappointed" with the court's decision.
CONTINUE READING
Posted by jmmb at 7:24 AM