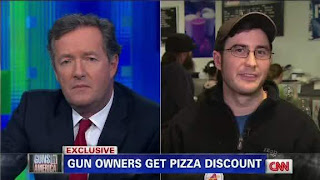 All Around Pizza and Deli owner Jay Laze appeared on Morgan’s show 'Piers Morgan Tonight' via satellite from his restaurant on Holland Road. Video from the brief appearance was posted to Morgan’s blog Tuesday.

“I would imagine that the profits you’re making from this extremely cynical commercial exercise involving armed people who you’ve no idea who they are come into your restaurant, would perk up your profits nicely,” Morgan began. “I mean, that’s why you’re doing it, to make money, isn’t it?”

“I am trying to make money because that will…how it’s supposed to work is I can save money and then I can use it later in life to support me when I put my work into society,” Laze responded.

Laze has received both support and criticism for offering a 15 percent discount at his restaurant for gun owners. Anyone who comes into the restaurant with a gun or shows a concealed weapon permit would receive the discount.

Morgan then addressed several statistics, stating 12,000 gun murders occur in America every year as well as 18,000 suicides involving guns. Morgan also stated 100,000 people are hit by gunfire a year and claimed that by inviting people with guns into his restaurant, the likelihood of accidents occurring rises.

When Morgan asked Laze how many people had been shot at his restaurant since he’s owned it, Laze responded with “zero.”

“Zero. So actually there’s been no gun threat to your restaurant whatsoever,” Morgan said. “The only threat now is you’re encouraging all these people who may or may not be criminals or mentally insane people to come in armed to the teeth with weapons, the likelihood of there being an accident in your place or somebody doing something stupid has just massively increased, so actually, rather than making your restaurant safer, going from zero shootings, you have now raised a massively higher probability of their being a shooting in your restaurant.”

But Morgan did not end his criticism there.

“That is why I called you an idiot the other night, because it’s an idiotic premise to work off to somehow going from no shootings in your restaurant to encouraging everybody in the area without any way of checking who they are to come in armed to the teeth is going to make your restaurant safer. And it’s exactly the kind of attitude that is unfortunately causing America the most hideous gun violence problems. Mr. Laze, good luck with your promotion, I hope it fails spectacularly. Thank you for joining me.”

The plan was for the discount to only run until March, but he may make it permanent due to the response.

It is unknown at this time if the plan is still in the works after the national attention Laze received.