From:   The Office of the State’s Attorney for Worcester County

Worcester County to Honor Crime Victims and Advocates at National Crime Victims’ Rights Week Opening Event
Worcester County State’s Attorney Office will open 2014 National Crime Victims’ Rights Week (April 6-12) with a ceremony honoring crime victims on the eastern shore—local champions of crime victims’ rights. This year’s theme—30 Years: Restoring the Balance of Justice.—celebrates the spirit that will advance the progress these heroes achieved.
Only 30 years ago, crime victims had no rights, access to crime victim compensation, or services to help rebuild their lives. They were often excluded from courtrooms, treated as an afterthought by the criminal justice system, and denied an opportunity to speak at sentencing.
Yet through decades of advocacy and hard work, we have come a long way. Today, all states have enacted crime victims’ rights laws and established crime victim compensation funds. More than 10,000 victim service agencies help victims throughout the nation. Every year, states and localities receive millions of federal dollars to support these services.
But National Crime Victims’ Rights Week reminds us that many challenges remain. Crime victims’ rights are not universal and are often not enforced. Only a small percentage of victims receive crime victim compensation, which is usually limited to victims of violent crime. According to last year’s National Crime Victimization Survey, more than 50 percent of violent crimes were not reported to police in 2006-2010. In addition, a 2011 report called the Use of Victim Services Agencies by Victims of Serious Violent Crime showed that only 9 percent of violent crime victims received needed services in the 1993-2009 timeframe.
Advocates also face a host of new challenges as they strive to provide culturally competent services for increasingly diverse populations (e.g., seniors, teens, immigrant populations) and victims of newly prevalent crimes (e.g., trafficking and technology-related stalking and identity theft). As funding sources decrease, providers must target their services even more strategically.
National Crime Victims’ Rights Week will be held April 6–12 in communities throughout the nation. In Washington, DC, the U.S. Department of Justice will hold OVC’s annual Service Awards ceremony that month to honor outstanding individuals and pro-grams that serve victims of crime. Worcester County will also observe National Crime Victims’ Rights Week with special events and programs, including the 25th Annual Maryland Statewide Memorial Service. OVC encourages widespread participation in the week’s events and in other victim-related observances throughout the year. For additional information about 2014 National Crime Victims’ Rights Week and how to help victims in your community, please contact the Office of the State’s Attorney for Worcester County at 410-632-2166, or visit at http://www.co.worcester.md.us/sao/default.aspx.

For more ideas on how to volunteer to help crime victims, visit the Office for Victims of Crime website, www.ovc.gov. 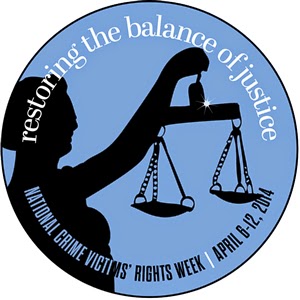