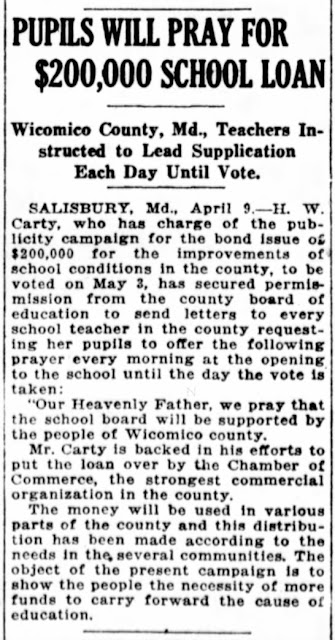 POCOMOKE CITY-  The new "Pocomoke Progress" newspaper made its appearance here last Thursday morning. The new publication has business and editorial offices here, with George N. McMath , President and Editor. He is also President and publisher of the "Eastern Shore News" at Onancock, in which the new Pocomoke periodical is being printed.

October, 1849
The Baltimore Sun
Destructive Storm on the Eastern Shore:

October 12, 1849:
A hurricane swept over a part of Worcester county on Saturday last, the most disastrous that has visited that section within the memory of the oldest man. Houses , barns, fences, granaries, bridges, &c., were but playthings of the elements and the loss sustained by many of our citizens is serious indeed. John H. Allen and John S. Jones, of Sandy Hill, had their granaries, situated at the junction of Crockle Creek with the bay, containing more than 2000 bushels of corn, blown over into the creek where both will prove to be total loss. A man named Joseph Cherrix , in charge of the granary, is missing and is supposed to have been drowned by the disaster. A dwelling on the farm of George Bishop, Esq., near Sandy Hill , was greatly damaged by a large tree being blown against it, knocking the chimney down. The barn on the farm occupied by Thomas Reed, near Sandy Hill, was also destroyed by the storm. The kitchen shed of Mrs. Catherine Selby, occupied by her servants, was blown over. On the farm of Mrs. Jones, near Girdletree Hill, not only the dwelling, but all the out buildings were blown over. There are other particulars and other losses we have yet been unable to collect with certainty . The fences and bridges shared the common fate and the roads in the lower part of the county are impassable.

The storm seemed to be most destructive in the neighborhood of Sandy Hill.

Footnote: Sandy Hill was the former name of Stockton.

The Parksley Hotel was another place where the traveling public was always welcome. It was in easy walking distance to the railroad station, the business district, churches, post office and other sites. In years gone by traveling salesmen made it one of their stopovers on a trip through the Eastern Shore. 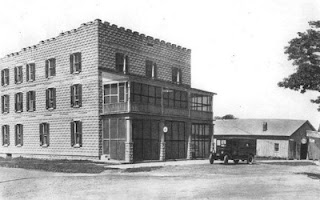 Footnote: Several years ago there was on-going work at the Parksley Hotel structure to convert it into Virginia's first "green friendly" Bed and Breakfast, and it was to be called the Parksley Hotel General Store with the store occupying the lobby area.  Anyone know the current status?

A "Blood Donors Club" was organized by 40 Pocomoke City residents.  Members would voluntarily donate blood when lives of those in need of blood were at stake. The club was one of the first of it's kind in the state.


September, 1905..  Amusements and other ads in The Washington Post.

Interesting, and thanks! Readers- To see how the former hotel looks today, go to the address given in comment 1.