Written By:  Bill Kerbin
POCOMOKE CITY -- A number of students from the Eastern Shore of Maryland and Virginia have been participating in Eastern Shore Robotics, a program in which they have been actually building robots at a section of the MIST building in Pocomoke City.
Having participated in the recent regional competition the students now have their sights set on the national championship. And to participate in this event they have to raise money.


One planned fundraiser is the Robotics Technology Exposition and Challenge set for Saturday, May 21, at Midway GM/Toyota. The Worcester/Accomack, Northampton and Salisbury teams will be demonstrating their robots at this event. Members of the teams will also be available to discuss the process that they use in building their robots. The event will feature the robots built and used in this year's first competition by the local teams.
In addition to Midway and the teams, the event will be co-sponsored by the Mid-Atlantic Institute for Space and Technology. Recently team members spoke to the Pocomoke mayor and Council and were given a contribution toward the national championship.


Joshua Nordstrom, who is chairing the event, said that he and the other sponsors want to show the students that there are career opportunities in the science, mathematics, engineering and technology fields; that there are scholarships and internships available.
He is hoping for additional corporate sponsors who will want to set up booths and displays. This year he is hoping to raise $3,000 to help fund the trip to the national championship and to expand the event in the future.
Anyone interested in the event can contact Fotios Skouzes at 410-957-6570 or Joshua Nordstrom at 4190-957-2222.

Source; http://www.delmarvanow.com/article/20110421/WCT01/104210312/Shore-students-set-to-show-off-robotics-work?odyssey=mod|newswell|text|Worcester County Times|s
Posted by jmmb at 7:45 AM No comments:

NRP found Kevin Matthew Twilley shining a light out a vehicle on Scotty Road in Worcester County at about 7:30 p.m.

Officers observed Twilley shooting deer in the field next to the road. A report says when officers approached Twilley, he fled, but Pocomoke City Police were able to stop the vehicle on Route 13.

Posted by The Public Eye at 8:22 PM No comments:

POCOMOKE CITY, Md.- Students across Delmarva are building robots to learn about engineering.

On Monday, a team of local high schoolers showed off their latest creation, affectionately called "Bubbles" the robot, at the Hawk Institute for Space Sciences in Pocomoke City.

The students say they spent about 150 hours to build a robot that competed in an international competition earlier this year. It went against other robots in a game that required each machine to toss balls into the attached trailing nets of competitors.

Organizers of the local non-profit group, called Eastern Shore Robotics, say it helps recruit a next generation of engineers. The group participates in the international FIRST Robotics competition.

"As our older engineers retire, we don't have a lot of really well-trained [and] technically-minded young kids coming in to fill those positions," said Chris Thompson, an organizer of the group.

The group uses resources from the Navy and NASA. It plans to begin working on a its next robot, under a strict six-week build period for the competition, beginning in January.

VIA WBOC-TV
Posted by The Public Eye at 10:57 AM No comments:

WBOC will be doing a Robotics overview tonight with interviews with local team members. More on this coming soon, stay tuned for updates.

Or, tune in to WBOC and WMDT TV for the local news. 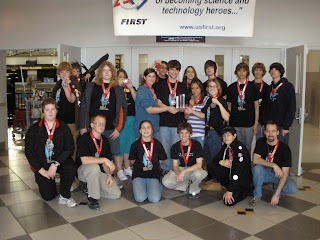 Posted by The Public Eye at 4:26 PM No comments:

On Thursday, Eastern Shore Robotics will host an open house showcasing FRC Team 1829 and information about the LEGO League for younger kids which will be starting this year. This function will include last years robot which Team 1829 took to the World Championship in Atlanta, GA.

If you are interested in Eastern Shore Robotics, FIRST Robotics, FRC Team 1829, or a Lego League, please attend the open house at Lockheed Martin starting at 5 pm. The flyer for the event is below. 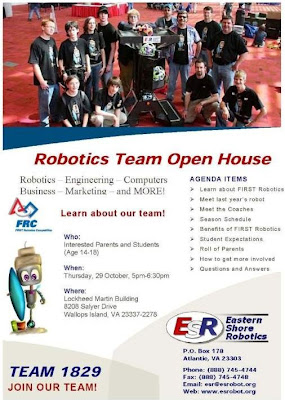