What Happens At Friday Night Football Practice When Chief Sewell Shows Up!

Football Season Begins.....
Salvation Army football teams practiced  their skills Friday night on the corner of Clarke and Willow.  These little guys were really into the game. 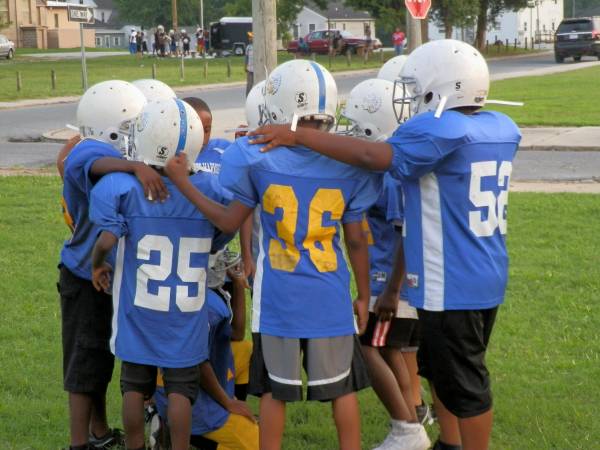 This is what happens when Pocomoke City Police Chief Kelvin Sewell walks up to show his support for football season and all  the teams! 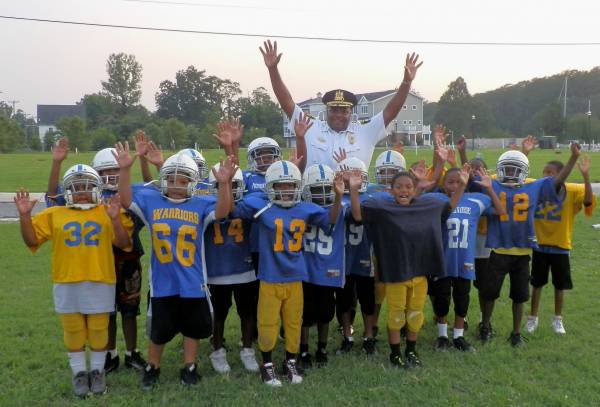 He reallied this team around and on the count of three.....
GO RED LIONS!! 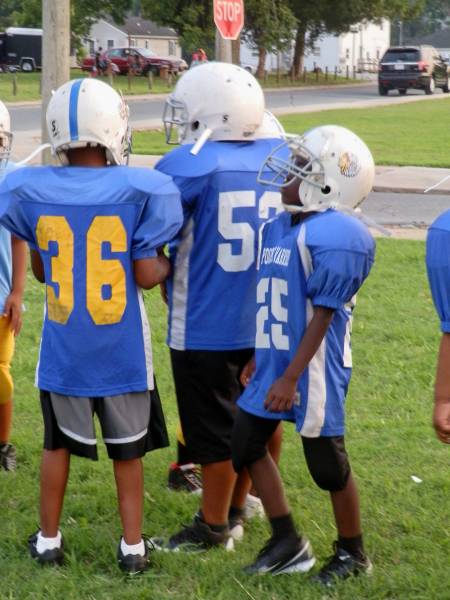 Matthew Pochily, director of public relations for the Salvation Army, said in a news release that one man distracted the bell ringer about 2:30 p.m. while a second man snuck up behind him, unhooked the kettle and fled.

While it was uncertain how much money the thieves took, the Salvation Army set a goal of $650 or more at the location for Black Friday, Pochily said in the release.

Anyone with information about the thieves is asked to call the Crime Line at 1-888-LOCK-U-UP.

"It's sad that at a time of great thanks, someone felt it necessary to steal from an organization who's mission is to serve those in need," said Major Lewis Reckline of the Salvation Army. "The money that they may have gotten away with in that kettle is no match for the services we offer that may have been able to help them had they come though our doors seeking assistance."

Those interested in supporting the Salvation Army can visit SalArmyHR.org to donate online, sign-up to be a volunteer bell ringer or host their own Online Red Kettle. Donations can also be made via mobile device by texting SAL to 50555.

Nearly 30 million Americans receive assistance from the Salvation Army each year. Their social services include providing food for the hungry, relief for disaster victims, assistance for the disabled, outreach to the elderly and ill, clothing and shelter to the homeless and opportunities for underprivileged children.

CUMBERLAND — Lou Simmons believes that if every farmer were to donate a small portion of each harvest to the poor, no one would go hungry in America. 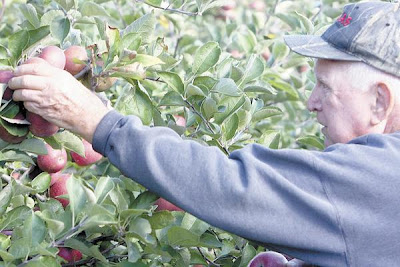 Simmons, who turns 84 next month, is doing his part by donating every single apple, pear, peach and cherry from his modest orchard atop Irons Mountain to the Salvation Army in Cumberland. Salvation Army volunteers distribute more than 30,000 pounds of fruit from the Simmons orchard each year.

Kitty Willison, director of social services at the Salvation Army on East First Street in South Cumberland, said the fresh fruit adds to the agency’s food pantry and is a highly desired commodity each season.

“Something like that would be a little different,” Willison said. “A lot of times (clients) will ask us if we have fresh fruit or vegetables.”

On Friday, eight young men from the Green Ridge Youth Center in Flintstone toiled under the supervision of Mark Miller, resident adviser, on a cool and breezy morning. Simmons expected that over a four-hour period, the youth center crew would pick and pack into small boxes approximately 2,000 pounds of apples. Maybe more.

The adjudicated youth are not being named due to their status as minors. However, they were pleasantly surprised at the variety — and the taste — of apples of various sizes.

“Is this edible?” one young man asked.

After Simmons sighed, smiled with patience and assured him it was, the boy took a hesitant bite.
“Actually, it’s pretty good,” the boy said before heading to the nearest apple tree.

It wasn’t long ago when Simmons, believing he was nearing the age of retirement, envisioned an empty orchard and planned to cut down his trees. He credits Judy Hodel, director of the youth center, in saving both the orchard and people in need from going hungry.

“When she found out, she says, ‘Don’t you dare,’” Simmons said. “Without her, there’d be no more orchard.”

Simmons used the opportunity to chat with the boys — he loves to tell a tale — and suggest that they use their time at the youth camp wisely.

“I don’t know what you did and I don’t care,” Simmons told the group while on a short break. “Get yourselves straight. Work hard.”

Hodel believes the work and the atmosphere serve the boys well. She credited Simmons with sending the camp some apples to share with everyone, providing the work crew lunch “plus lots of stories.”

“It’s a beautiful place,” Hodel said of the Simmons orchard. “It’s a place of serenity in its own right.”

The boys, Hodel said, “get a sense of helping other people. They get a work ethic. They get some teamwork skills (and) social time that’s not out getting into trouble on the streets. A lot of them probably have never experienced an apple orchard.”

Hodel is thankful Simmons is willing to keep the orchard operational.

“He does a great service,” Hodel said. “He feeds people with his apples. He donates everything he has. I hate to see that get lost.

"Back To School Supply" Drive For Accomack County Students 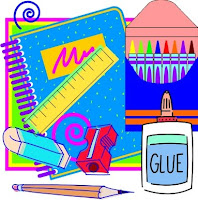 ACCOMAC --Today, students are facing a tremendous number of obstacles when it comes to completing their education. Not having the necessary school supplies is an obstacle in which we all can help.

The Salvation Army -- Accomack County Service Unit is conducting a "Back to School Supply" drive for students in Accomack County Public Schools during the month of August.

School supplies collected will be donated to each elementary and middle school classroom.

Persons wishing to help, may drop off school supplies at the Salvation Army office located at Calvary Bible Church, 22344 Front St. in Accomac on Thursdays from 10 a.m.-2 p.m.