The "Extreme Makeover: Home Edition" team, in partnership with local builder Trademark Construction of Chesapeake and hundreds of area volunteers, is in Virginia Beach and over the next week to build a new home for this family, who live in a modest ranch house at 3020 Gentry Road, located just off South Lynnhaven Road behind Lynnhaven Mall. Team leader Ty Pennington and his designers surprised the family this morning while in church services, informing them of their good fortune.

Beginning Tuesday, the public can watch the build from special spectators viewing areas at the site; the public should park at Lynnhaven Mall and take shuttle buses to the construction site. To reach the mall, take I-64 to Norfolk, then I-264 toward the Virginia Beach oceanfront, exiting at Lynnhaven Parkway South, which leads you to Lynnhaven Mall.

Beverly Hill is known to have a heart of gold, and she's been sharing her love for 15 years with more than 35 foster kids, according to a press release. A friend nominated the family last year after the TV show announced it was looking for a deserving family in southeastern Virginia. After raising her two biological children, Beverly and Fred formally adopted six foster girls, who today range in age from 9 to 18. They started in the foster parent program with twins in 1992.

Hill also feeds and clothes the homeless, and Fred gives his wife most of the credit for the work they do.

"I'm a long-haul truck driver, so I'm only home for about a day and a half each week," he said. "It's been Beverly who does most of the work and makes all this happen." Beverly says her motivation comes from her faith.

"God told me to feed people just as he feeds me," she said. "I knew that I had to go out and help others and feed them just as God feeds me and my family every day.

"I cook them fried chicken, macaroni and cheese, collard greens, hot bread ? good old Southern cooking. "I go where the homeless live, not in shelters, but in the woods, under bridges, wherever. I never ask them why they are there or what they are doing. The only thing we ask them is 'What do you need?'

"Even at Thanksgiving, no one at our house eats until we have gone out that day and fed dinner to the homeless first."

The Hill-Burdettes have inspired their daughters to give back to the community, and now they routinely participate in making meals and delivering necessities to those in need.

Unfortunately their 1,200-square-foot home, pictured here behind the family photo courtesy Drew Landkford, is not as giving as they are, and its failing construction is jeopardizing their passion for giving back. Faulty electrical wiring, a sagging ceiling, and a floor that is crumbling are a recipe for disaster. With only one working bathroom in a house with seven women, the house is overdue for a renovation.

In "Extreme Makeover" style, the show will tear down the old structure when a group of Mack trucks paves a path directly through the home Monday morning in advance of the 106-hour build.

In addition, four oversized trucks have been coming across state today from Martinsville to Virginia Beach, carrying the modular and panelized parts needed to construct the home. TowneBank is picking up the $6,000 bill for the costs associated with this part of the project.

The program is expected to air at 8 p.m. on ABC-TV in several weeks. The Build Team will begin construction immediately following Monday's demolition and expect to be done in time for the Reveal to the family, after they return from a Disney vacation, on Saturday, Feb. 5.
www.dailypress.com
Posted by jmmb at 9:06 AM No comments:

Ty Pennington Will Show Up At Someone's Door .....

Surprise! "Extreme Makeover: Home Edition" could be knocking on your door this month.
The Emmy Award-winning reality show is coming to Hampton Roads for the first time to rebuild a home for a family, but the beneficiaries won't find out until later this month, when host Ty Pennington shows up at their door.

Then, they'll be whisked away for a vacation to parts unknown, while volunteers rebuild their home in 106 hours.
Duane Cotton, president of Trademark Construction in Chesapeake, participated last year in a makeover in Georgia and said he knew the area had the kind of spirit to make it work.
Along with the construction, a food drive to help local food banks has begun, and a pep rally is planned from 7 to 9 p.m. Jan. 20 at the Virginia Beach Convention Center.
The episode featuring the local home will air about eight weeks after the project ends.

Trademark, Waller Todd and Sadler Architects in Virginia Beach and others will donate their services. Organizers need skilled and not-so-skilled volunteers.
For more information on how to help, visit www.extremetmc.com.
www.hamptonroads.com
Posted by jmmb at 7:30 AM 1 comment:

ABC'S "Makeover" Show To Be In Baltimore Next Week

For the second time in less than three years, ABC's "Extreme Makeover: Home Edition" reality TV show is coming to Maryland to build a dream home for a family.

Host Ty Pennington and his team of celebrity designers will arrive in the Baltimore metro area next week to begin the whirlwind construction-design project that provides families with a brand-new home equipped with all the bells and whistles.

The show considered five families from the Baltimore region before deciding on the winners, who will be disclosed July 9, according to Shane Swisher, spokesperson for Excel Homes, a Camp Hill, Pa.-based custom modular manufacturer, which will be leading construction of the project.

A pep rally has been planned for 8 a.m. to 10 a.m. Thursday at Grace Fellowship Church, 9505 Deereco Road in Timonium, to help identify volunteers and donations.

"The more the merrier," Swisher said about the effort, which usually involves hundreds of volunteers and thousands of supporters. 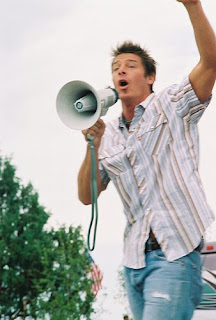 The project is looking for those with skills ranging from graphic design to sewing to drywalling. Volunteers skilled in excavating, painting, framing and roofing are also needed, along with donations of construction materials and furnishings.

Although the details of the Maryland home will not be revealed until the show airs, past seasons have included such features as a practice football field in the backyard of one family's home, and a barn-themed room anchored by furniture made of bales of imitation hay for a horse-loving member of another.

The project is expected to take a week to complete, according to Swisher, and will air sometime in September when the popular feel-good show enters its eighth season.
"Extreme Makeover: Home Edition" last visited Maryland in October 2007 when a Port Deposit woman and her two children received a new home in Cecil County. That show aired in January 2008.

For more information, go to excelhomes.com/baltimoreextreme.
www.baltimoresun.com
Posted by jmmb at 7:05 AM No comments: