Eastern Shore country and gospel music fans are remembering "Tucker" Bowden of Pocomoke who has passed away at age 86.

"During his country/gospel musical career of 71 years, he played steel guitar for such Grand Ole Opry stars as Patsy Cline and George Jones, and enjoyed the acquaintance of many famous country music celebrities of that era. His smooth, deep speaking voice was a perfect match for radio broadcasting and MC events. "Tucker" Bowden, known as "The Old Country Boy" DJ, enjoyed local celebrity status on the Pocomoke radio station where his faithful radio followers (including ECI) frequently sent him letters, calls, and gifts of admiration. Other occupations included sergeant with the Chincoteague, Virginia police department and accomplished musician with the Chinco Rhythm Boys band." 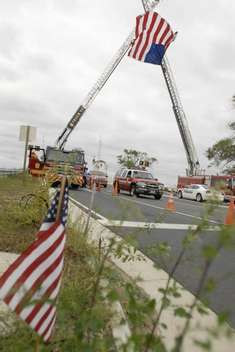 CHINCOTEAGUE -- At 1:58 p.m. Friday, the final alarm was sounded for volunteer firefighter Hal Clark, 54, who died in the line of duty Sept. 24.

Upward of 450 people, including scores of firefighters and rescue workers from Virginia, Maryland and Delaware and some three dozen American Legion Riders, gathered Friday at Union Baptist Church on Chincoteague for funeral services for Clark, who died at Peninsula Regional Medical Center after taking ill while fighting a raging brush and woods fire near New Church.

His death was the first line of duty death on the Eastern Shore of Virginia in a decade.

Clark was president of Atlantic Volunteer Fire and Rescue Company and was a lifetime member of both Atlantic and Chincoteague volunteer fire companies.

Clark was remembered as one of "a very special breed of people" -- firefighters -- who "charge in where angels fear to tread" in a eulogy given by the Rev. Bob Reese, who officiated along with the Rev. Maurice Enright.

Enright said Clark will be remembered as "the mechanic, the carpenter, the 'Mr. Fix-it,' the cook -- there was so much he could do and so much he would do" for those in the community, such as the time when he and fellow firefighters built a wheelchair ramp at the house of an Atlantic man who needed one.

Among the many charitable deeds Clark was known for were cooking at the annual Chincoteague Volunteer Firemen's Carnival and transporting drinking water to the Chincoteague ponies when they needed it during the hot summers, Enright said.

Despite his own grief after tragically losing his son, Todd, in an accident 11 years ago, Clark continued to give to the community, both as a firefighter and in many other ways, the minister said.

After the 45-minute service concluded, Clark's flag-draped casket was carried atop Atlantic Volunteer Fire and Rescue Company Engine 4-5, preceded by a single motorcycle rider, in a funeral procession that wound its way 12 miles across the Chincoteague causeway from the church to the John W. Taylor Cemetery in Temperanceville.

The procession -- which included dozens of firetrucks and ambulances draped in black bunting along with police cars, government agency vehicles and private cars -- left Chincoteague Island under an arch created by the crossed ladders of two fire trucks parked at the foot of the drawbridge, one from Chincoteague and one from Salisbury, with a large American flag hanging from the apex.

Fire and rescue departments represented in the procession came from as far away as Greensboro, Md., Ocean City and Dagsboro to the north and Virginia Beach and Hampton to the south.

A crowd including many families with small children and people standing respectfully at attention gathered at the intersection of Chincoteague and Atlantic roads to watch the procession pass by, a process that took some 20 minutes.

Clark was laid to rest at the cemetery with full firefighter honors.

Today family, friends, community and fireman from many departments will say their last goodbyes to the loved, respected and admired "Hal" Clark.
Please keep in mind and be aware that this may cause some delays in your travels. Be aware that funerals for people such as "Hal" always have a large turnout of fireman and fire equipment. Also present today will be a huge gathering of motorcyclists. While fire trucks are easy to see motorcycles sometimes are not. 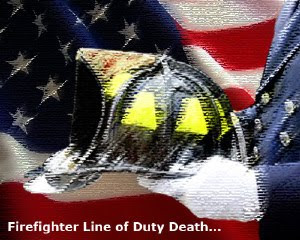 For the funeral on Friday.....
The company is expecting a large number of firefighters and motorcyclists to gather to pay their respects to Hal Clark. With this large number, we anticipate the procession to the cemetery to be quite lengthy. Roads may be blocked and traffic may be stopped temporarily at various locations on Chincoteague and in the towns of Atlantic and Temperanceville.

Below is an estimated time of arrival at various locations: (please note that times are all approximate)

Please note that these times are estimates for the first vehicles arriving to locations. The exact length of the procession is unknown. Expect anything from 10-60 minutes of delay. 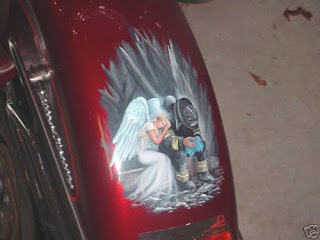 Hal was born in Salisbury, Maryland on March 13, 1956, the son of the late Bill and Virginia (Shields) Clark.

He worked for the Town of Chincoteague in the public works and water department.

He was predeceased by a son Todd Clark.

All firefighters and motorcycle riders are welcome and encouraged to participate.

The family would like to invite everyone to join them for a reception after the service at the Chincoteague Center on 6155 Community Drive on Chincoteague, VA. Flowers accepted or donations may be made to Fire Company of Your Choice.

Services entrusted to Salyer Funeral Home, Inc., where condolences may be made online at www.salyerfh.com<>