Most adults have some sense that taking a break from routine is a good thing, whether it's a few minutes to walk away from the task, 15 minutes to chat with co-workers or a full-fledged half-hour brisk walk. People who return to work (or the classroom) after a break often find themselves feeling refreshed, focused and ready to tackle the job at hand.

A break is a great stress reliever, too.

In today's public schools, everyone from administrators to teachers and students is feeling the pressure to increase test scores and meet the increasing demands of the federal No Child Left Behind Act. Indeed, Pocomoke Middle School's elimination of recess was part of the effort to improve academic performance and raise test scores. Eliminating recess increases instructional time in the classroom.

But is this productive? Research indicates withholding recess may actually contribute to behavior problems and decreased ability to focus on the part of students, making elimination of recess counter-productive. A recent study on how recess affects academic performance found that in schools without recess, the amount of instructional time lost to fidgeting adds up to the amount of time it takes to have recess; the gain in instructional time may be without benefit. Other studies reach similar conclusions. Teachers who do not get an adult equivalent of recess may also become more irritable as the day wears on.

According to a 1998 study, this need for regular downtime is part of our physiological makeup -- our brains need a break every 90 to 110 minutes to recycle chemicals for long-term memory establishment. Regular physical activity can contribute to both mental and physical well-being.

Perhaps schools should seek to increase the quality -- as opposed to the quantity -- of available instructional time. Experience, tradition, science and observation all point to the same conclusion: Recess effectively contributes to an enhanced ability for students to focus on academics.

Pocomoke Middle School has now tried operating with and without recess. Short of discovering that academic performance improved dramatically without recess, administrators should reinstate recess as parents have requested.

A new school year begins today. Hundreds of students will descend upon the public schools in Accomack and Northampton County today as the school systems, continuing to face the burdens of state budget cuts, will work to keep quality education their main goal.

Accomack County School Superintendent Rick Bull said in a letter to parents dated Sept. 6 "Like many school divisions across the state of Virginia, Accomack County has been charged with reducing its budget while still maintaining high quality services for its students. Our long-range fiscal planning has ensured the resources needed to educate students in modern facilities with staff sizes aligned with the Virginia Standards of Accreditation. The support of the School Board and Board of Supervisors cannot be overstated. These positive working relationships have helped us achieve great things in our division."

Bull went on to say that despite difficult economic times, Accomack County Schools remain dedicated to providing each and every student in the division a quality education.

Northampton County School students and parents will be looking at a new policy regarding cell phones in schools.

High school students must keep the cell phones in their vehicles or lockers until after school ends.

Any cell phones confiscated during the day will be kept by the school administrators until the last day of school in June.

Northampton County also faced budget cuts for the 2010-2011 school year. Those figures werent available to us at the time this story was composed. 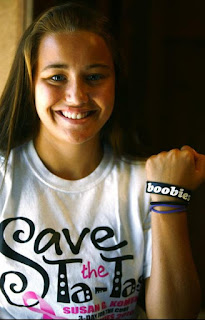 SIOUX FALLS, S.D. — Cancer has ravaged several of Ann Aberson's relatives, so she doesn't have a problem with her two teenage daughters wearing bracelets to raise awareness of breast cancer.

But their school principal does.

This week, Baltic High School, just north of here, became one of the latest across the USA to ban the rubber bracelet, which has a message some say is in poor taste: "I love boobies."

The bracelets have caused controversy in schools in states including California, Colorado, Idaho, Florida and Wisconsin. Some districts allow students to wear them inside-out, and others ban them.

"When we had an assembly the first day of school, I basically told the students we are not insensitive to the cause," Baltic High Principal Jim Aisenbrey says. "I think everybody in the gym, including myself, has had a family member or relative or friend who has dealt with the issue. I do think there are more proper ways to bring this plight to the attention of people, and I don't think this is a proper way."

"I guess I never thought of them as offensive," Aberson says. Her grandmother and five of her grandmother's sisters battled breast cancer.

The bracelets, which sell for about $4 in stores, were created by Keep A Breast Foundation, a Carlsbad, Calif., non-profit group that seeks to increase breast cancer awareness among young people.

In the Fresno area, students in the Clovis Unified School District were told not to wear the bracelets in class — or to turn them inside out so the message is not visible, spokeswoman Kelly Avants says. The school district's dress code outlaws jewelry with sexually suggestive language or images, she says. PRINCESS ANNE -- A group of middle schoolers gathered in a field near the UMES driving range on Wednesday to launch small rockets they had built from kits and painted with bright colors over the past week.

But a strong wind that blew across campus might mean postponing the launch, said Berit Bland, a NASA employee working with this year's Reach for the Stars science camp.

The students could launch one or two as a test before setting off the rest, she told them.

"That's the nature of the beast in rocketry," she said. "Safety is the number one issue."

As the first one soared into the air, apparently unaffected by the wind, a cheer went up from the 35 students, their parents and other spectators.

"It's a lot of fun," said Taylor Dumpson, 14, who will be entering Wicomico High School in the fall, and has spent the past four summers in the camp.

The camp, which runs for two weeks, is held in cooperation with NASA and Mid-Atlantic Institute for Space and Technology, a non-profit association based in Pocomoke. Students from Worcester and Wicomico counties learn about robotics from engineers who work at NASA and the University of Maryland Eastern Shore.

The camp's focus is to encourage students to pursue careers in science, technology, engineering and mathematics, and at least one participant said she is headed in that direction.

"At first I just wanted to go to camp because it sounded like a lot of fun, but it's opened my eyes to the engineering field." said Samantha Dykes, 14, who is in her third year at the camp and will enter Snow Hill High School in the fall.

The campers work alongside high school and university students, who are participating as interns in the STEP UP (Science, Technology and Engineering Pipeline for Underserved Populations) program sponsored by NASA and the Mid-Atlantic Institute.

One-third of the participants are teens with disabilities, while another third are considered at-risk. The rest are traditional students, Dingwall said.

"We deliberately pair them with kids they don't know," she said. "It's very interesting to see what happens."