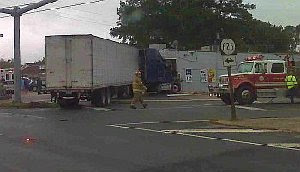 MELFA, Va.- Virginia State Police say two people were injured Monday after a tractor-trailer crashed through the front of a Shore Stop convenience store on Route 13 in Melfa.

Troopers say a delivery man was inside the store when he saw the tractor-trailer headed his way. The delivery man then pushed the store clerk out of the way to safety. 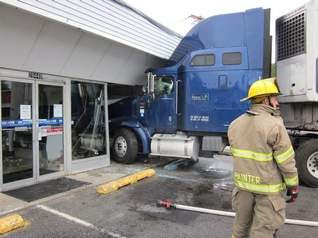 Both the delivery man and the clerk were transported to Shore Memorial Hospital in Nassawadox where they were treated for non-life-threatening injuries.

Police determined the tractor-trailer driver was at fault in the accident. He was charged at the scene.

Amish Family With Newborn In Buggy Involved In Crash 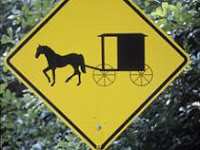 PARKMAN TOWNSHIP, Ohio - When the driver of an SUV slammed into the back of a buggy in Geauga County Wednesday night, the impact ejected a pregnant Amish woman and several of her young children.

Barbara Kauffman suffered severe head injuries and was life-flighted to MetroHealth Medical Center, where doctors were able to deliver her child.

On Friday, a MetroHealth spokesperson said Barbara Kauffman is still in critical condition, but doctors have indicated her newborn baby boy is improving and is now in fair condition.

Troopers with the Ohio Highway Patrol said the driver who hit the buggy allegedly had drugs in her system.

Julie Pirtz, 31, of Warren, whose own infant daughter was in her SUV at the time of the collision, has been cited for operating a vehicle while under the influence, and for failing to keep a safe distance between her vehicle and the buggy.

"Anytime anyone is operating a vehicle under the influence of alcohol or drug abuse, it's going to greatly diminish their fine motor skills and their ability to react, and their reactionary time, when they're operating a motor vehicle," OSP Sgt. George Biskup said. 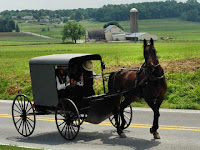 Meanwhile, Geauga County prosecutors say they plan to take the case to a grand jury and will seek additional charges against the driver of the SUV.

The criminal counts would reflect the injuries suffered by Barbara Kauffman and the other members of her family.

Troopers said the case illustrates the need for motorists to be cautious when they travel through Amish country.

"We encourage drivers, especially in the Amish communities, to slow down, be prepared for the unexpected basically, expect the unexpected," said Biskup.
www.fox8.com
Posted by jmmb at 7:30 AM No comments:

Pack your patience if you are headed towards the bridge this afternoon.........

ANNAPOLIS, Md. - An accident on the Chesapeake Bay Bridge is causing some major headaches for drivers in both directions.

The Maryland Transportation Authority says a three car accident closed the eastbound span of the bridge for more than an hour.

At one point, traffic headed east was backed up about five miles. Those delays cleared up by 3 p.m.

However, clearing those delays hurt traffic heading back from the beach. Bridge officials were using one of the lanes on the westbound span for traffic heading east, meaning there were only two lanes traveling westbound.

Unfortunately, that is causing major backups for those headed back from the beach. By 3 p.m., there was a 10.5 mile backup heading west over the Bay Bridge.

Maryland State Police say a tractor trailer, a pickup truck, and a sedan all collided on the bridge around 11 a.m. Seven people were taken to the hospital with non-life-threatening injuries. Police are still investigating what caused the accident.

Callers tell the WTOP Traffic Center that drivers caught in the traffic were playing Frisbee on U.S. Route 50 while eastbound traffic was stopped on the bridge.

ACCOMACK COUNTY, Va. - The chief of Exmore police in Accomack County was killed in a car accident when his tire blew out at about 6:45 p.m. Wednesday, according to Michelle Cotten with Virginia State Police.

Chief Stephen T. Elliot was killed after the front left tire of his 1985 Ford pickup truck blew out on Route 609 in Accomack County, causing him to run off the road. His car overturned and he was ejected.

Cotten said alcohol was not a factor in the accident, but Elliot was not wearing a seatbelt at the time.

Elliot's vehicle was the only one involved in the accident, so nobody else was injured.

WAVY.com has sent a crew to the scene.

Thoughts are with the family and all the fine people of Exmore. Such a tragedy.