NFL Playoff Observation From My Kitchen

I just made an observation a few minutes ago. And it's the kind of thing that alot of us don't really pay attention to because we take so much for granted anymore and our lives go so fast.

I am probably one of the few that does take notice of the pregame activities. My husband has learned (the hard way) NOT to use the remote to find another channel to watch until the Star Spangled Banner is over. He learned quickly that those things were a dear thing in my life. So now, when most would get up to go find something to eat and come back (hoping the patriotic "thing" is gone) he watches.

When everyone left today from my house I left the tv on. No special reason. I just didn't want to stop making the pot of soup I had started. As most of us know the NFL playoff games are on today. Now I don't care for football (I know) but I do care about the opening ceremonies and how the Star Spangled Banner is sung. NFL seems to be doing a really great job this year with that song but every year during Nascar I cringe!

Anyway, the National Anthem started out really good. Just a shame I can't remember the American Idol winners name. But what came after really touched my heart. There before a crowd of thousands. the great American flag was opened on the arena floor, held securely by our great men and women of the military forces. Now I have seen one of these great flags with my own eyes and unless you see it, stand under it you can never truly imagine the true power of those colors. 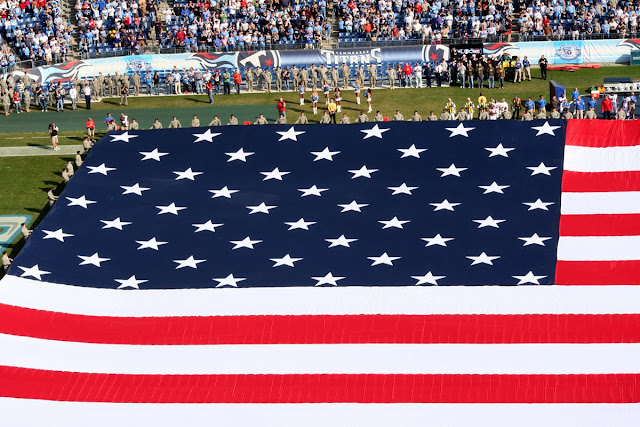 But in the wings, waiting, was the great American Bald Eagle perched regally on the left arm of his caretaker. Now for me the Bald Eagle is an ordinary sight back here where I live. BUT, with great power in his thrust for take off the Bald Eagle soared in elegance around the arena and over the huge flag as the crowd roared! He just seemed to be floating up in the air, over our flag as the National Anthem ended.
Wow! I thought. Wow. That was awsome. And then I had to wipe my eyes.

You know, we move so fast in our lives anymore. We hear and we see but most times it is just for the pure sake of navigation to get to the next point in our day. We don't pay attention and we take for granted the things that have allowed us to be free for centuries. And I am certainly smart enough to know that it wan't just the American flag, the Star Spangled Banner and the American Bald Eagle that brought us to this point in history. It is because of those men and woman embracing that great flag that have provided us with freedom all these years and it is because of their efforts and determination that we can even witness a pregame show.

Thankyou to all of them. It got my attention today as it does most times. It makes me feel proud. It made me become all teary eyed with patriotism.

I'm sorry I missed seeing what you described. I don't care much for football, so I didn't have the game on. Thanks jmmb, for sharing this with us.