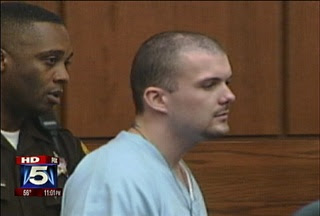 Paul Warner Powell thought he was smarter than the Prince William County prosecutor.

A jury sentenced Powell to death, but an appeals court said that decision was wrong. The judges said there was no proof Powell sexually assaulted teenager Stacie Reed before killing her. That meant life in prison, not death.

Thinking he was off the hook, Powell wrote a stinging letter to prosecutor Paul Ebert:

[Since]"...The Virginia Supreme Court said that I can't be charged with capital murder again, I figured I would tell you the rest of what happened on January 29, 1999 to show you how stupid all of y'all (expletive) are."

Powell's taunting letter described in detail how he tried to rape Stacie Reed before he stabbed her. He then told how he raped her younger sister Kristie and slashed her throat. Kristie survived and still bears scars. She identified Powell as the attacker.

In the letter, Powell told the prosecutors he was confessing because double jeopardy prevented prosecutors from seeking the death again.

"I no longer have to worry about the death penalty," he wrote. "And y'all are supposed to be so goddamn smart."

It turns out - prosecutors were still smarter. They threw out the original indictment. Another jury sentenced Powell to death, this time based on his own confession.

Double jeopardy applies when a person has been acquitted, but not when a conviction is overturned.

Neither the governor nor the Supreme Court will step in.

Paul Powell will die in the electric chair at 9 p.m. TONIGHT night.

Email ThisBlogThis!Share to TwitterShare to FacebookShare to Pinterest
Labels: bad decisions when you have no brain, virginia execution