On Friday a new set of 10 first-class stamps bearing the faces of cheerful dogs and cats went on sale nationwide. The stamps were designed to promote adoption of animals from shelters.

The stamps are part of a "Stamps to the Rescue" campaign to encourage pet adoptions from shelters and to raise funds to buy food for animals that live in shelters.

The photos taken photographer Sally Andersen-Bruce features the faces of five cats and five dogs whom have all been adopted from a shelter in New Milford, CT.

This isn't the first time the postal department has brought awareness to cats and dogs. Cat, dog stamps push adoption of shelter animals. Previous postage stamps featuring cats and dogs have included a 13-cent stamp of a kitten and puppy playing in the snow in 1982; a set of pet stamps in 1998 and in 2002 when a kitten and puppy were featured on the "Neuter or Spay" stamps.

If you are looking for a new puppy or kitten consider the animal shelter in your area. Most animal shelters can be found on line and feature a "Pet Of the Week". You would be so surprised to see the animals that had to be given up because a family that once loved them so much could no longer care for them. And it would break your heart to see the amount of once loved animals are given up by those that are elderly.

These animals aren't bad animals. These animals have just fallen upon some hard luck and need you to give them a new home filled with love. If you can not keep a pet consider the "foster" program. They all help but they can't be successful without your donations and dedication.

These are just two of the adopted animals in my family. 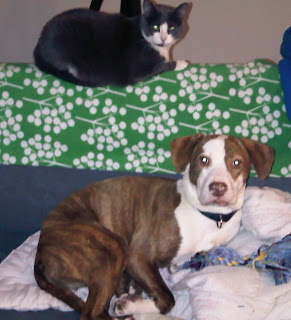 (above) This is Broccoli (the cat) and Sprout (dog). Both of these animals were adopted from a shelter. Sprout just graduated from obedience school this week. 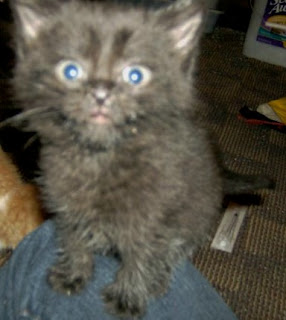 This is Lenore and still lives at a shelter until she is old enough to go into the "foster care" program. Lenore, along with her brothers and sisters, had to be bottle fed when they arrived at the shelter. She has already has a foster parent.