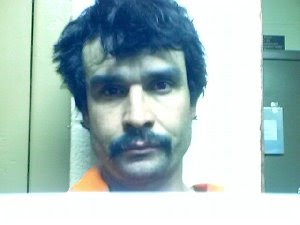 According to Sheriff Larry Giddens, on April 11, 2010 at approximately 5:57 PM, the Accomack County Sheriffs Office received a report of cockfighting activity on Kellam Lane near Accomac, Virginia.

Upon their arrival, deputies discovered evidence of recent cockfighting activity to include numerous roosters as well as a variety of fighting paraphernalia. During the investigation into this incident a variety of evidence was seized including 27 live roosters. The roosters are being held at the Eastern Shore Regional Animal Control Facility in Melfa.

On April 19, 2010, a General District Court judge ordered the roosters to be turned over to the Accomack County Sheriffs Office for final disposition.

On April 21, 2010, Belarimino Bedoya Alvarez (photo above) was arrested and charged with promoting, preparing for, engaging in or being employed in, the fighting of animals for amusements, sport or gain. Alvarez is currently incarcerated in the Accomack County Jail in lieu of a $10,000 bond.


www.shoredailynews.com
Posted by jmmb at 7:00 AM