British scientists warned that the oil spill is increasing the level of arsenic in the ocean, and could further add to the devastating impact on the already sensitive environment.

The spill is already being labeled as America's worst environmental disaster and has turned into a economic and PR nightmare for the British company.

Seventy-five days into the spill, the oil has fouled some 715km of shoreline in four southeastern US states, killed wildlife and put a massive dent in the region's multi-billion-dollar fishing industry.

The clean-up operation, which has already cost, $US3.12 billion ($3.7 billion), is expected to rise even further after efforts were hampered by technical setbacks to cap the leak and adverse weather conditions.

In a further blow, an operation to permanently cap the ruptured well on the seafloor far below the surface cannot begin until engineers finish drilling relief wells, in mid-August at the earliest.

Imperial College London researchers warned the effect on the environment could worsen unless clean up efforts were hastened.

They said the arsenic then gets “magnified” up the food chain, as fish eat small amounts of the deadly poison and may eventually impact humans, researchers said.

Professor Mark Sephton said arsenic, which is found in seawater, was normally filtered out of the ocean when it combined with sediment on the sea floor.

“But oil spills stop the normal process because the oil combines with sediment and it leads to an accumulation of arsenic in the water over time," he said.

"Arsenic only needs to be a 10th of a part per billion to cause problems.”

He added: “Our study is a timely reminder that oil spills could create a toxic ticking time bomb, which could threaten the fabric of the marine ecosystem in the future.”

Prof Sephton called for a comprehensive mapping of arsenic levels around the world which would allow authorities to consider banning oil drilling in areas with dangerous levels of arsenic.

The findings were published this month in the journal Water Research. 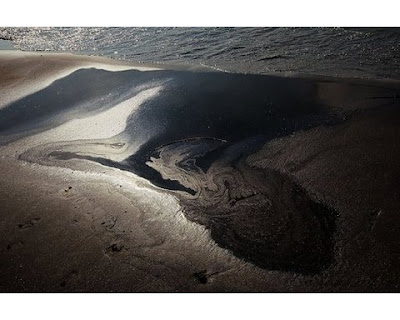 The warnings come after Hurricane Alex sparked a five-day shutdown, raising new questions over how BP would pay for the mounting costs.

Meanwhile, cleanup workers arrived back on Grand Isle, Louisiana by the hundreds, spilling off school buses that shuttled them in from around the state with one worker claiming it's the most oil he had seen so far.

However, while skimming operations resumed in Louisiana, rough seas kept vessels tied up in harbour in three other southeastern US states and no controlled burns were being carried out.

Skimming was suspended last week as Tropical Storm Alex, which later became the first Atlantic hurricane of the 2010 season, entered the Gulf.

BP is now pinning its hopes on the giant Taiwanese supertanker A Whale exponentially boosting the amount of oil and water mix being scooped up from the surface of the gulf.

The tanker should be able to vacuum up 78.75m litres of oily water a day, separate it and spit the seawater back out.

Tests on the 275-metre tanker-turned-skimmer were expected to be completed by Monday before officials decide whether to deploy it.

It also emerged last night that BP is now turning to rival oil groups and sovereign wealth funds to fend off a possible hostile takeover bid.

The National, an Emirati newspaper based in Abu Dhabi, reported that sovereign wealth funds in the oil-rich Middle East have proposed making a strategic investment in BP, which has pledged to place $US20 billion ($A23.74 billion) in an escrow account to pay for the cleanup in the Gulf.

The firms were also allegedly mulling buying key assets from BP and financially backing any capital the oil company might plan to raise after the British energy giant lost over half of its stock market value and saw its shares plunge in the wake of the disaster.

The National Oceanic and Atmospheric Administration meanwhile expanded the area closed to fishing in the Gulf beyond the current northwestern boundary off Louisiana, bringing to the closure to 210,258 square kilometres or 33.5 per cent of the Gulf's federal waters.

Email ThisBlogThis!Share to TwitterShare to FacebookShare to Pinterest
Labels: arsenic in the ocean, BP disaster, environment