BLOXOM -- Members of the Bloxom Volunteer Fire Company are looking forward to moving into their new firehouse nearly four years after the old one burned down in a blaze of unknown cause.

Crutchley Enterprises of Melfa is the company building the new firehouse.

On the morning of Jan. 18, 2006, Bloxom volunteers, including Bagwell, were out fighting another blaze when they received a call for a fire at their own firehouse.

The fire destroyed the 50-year-old building, but firefighters, including some from several other fire companies, were able to protect several nearby buildings from damage.

The fire company never stopped responding to calls after losing its home, which was a center of activity in the town of 400.

The station went out on calls the day after the fire, Bagwell said at the time, with calls to the fire department for a time being forwarded to his own home phone.

The Bloxom Volunteer Fire Company is continuing to raise funds to help defray the cost of the building, including a successful car show it held a few weeks ago and an upcoming raffle. The company took out a loan with Taylor Bank of Pocomoke City to help pay for the building. 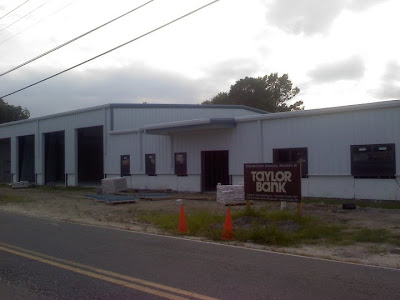 The new firehouse takes up the entire footprint of the fire company's original lot on Route 316, and additional land was purchased to accommodate parking and stormwater management.

Bagwell said the company also has replaced the equipment it lost in the fire, thanks in part to a FEMA grant. The company lost two ambulances in the blaze. Isle of Wight County, Va., and Caroline County, Md., firefighters donated equipment to Bloxom soon after the fire.

The fire company plans to hold an open house once the firehouse is ready for occupation, both to celebrate its opening and to thank the extensive list of people who have donated toward its cost.