SAN JOSE MINE, Chile (AP) - The last of the Chilean miners has been raised from deep beneath the earth. All 33 men have now been delivered from the longest underground entrapment in history.

The foreman who held the group together when they were feared lost was the last man out. Luis Alberto Urzua was hoisted to safety in a joyous climax to a flawless rescue that captivated the world

The intricately planned rescue that ended late Wednesday moved with remarkable speed -- and flawless execution -- hauling up miner after miner in a cramped cage through a narrow hole drilled through 2,000 feet of rock.

The 33 men spent more than 69 days trapped in the lower reaches of the mine after a huge collapse of rock blocked the way out on Aug. 5. 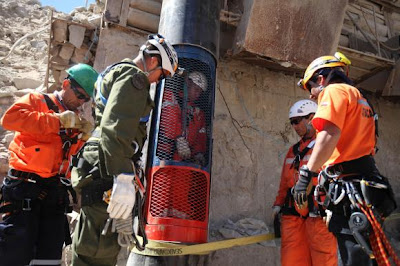 Glory be to the Lord~