The suit was brought on behalf of a New Jersey woman who bought chicken at a BJ's Wholesale Club bearing the Harvestland label, a trade name used by Perdue for birds raised in Kentucky and marketed as "purely all-natural" and "humanely raised."

The suit alleges that the poultry producer's marketing violates New Jersey's consumer fraud law. The complaint seeks unspecified compensatory and punitive damages against Perdue, as well as an injunction barring it from making claims that it treats its birds humanely.

"Companies like Perdue are exploiting the dramatic growth of consumer demand for improved animal welfare for their own profit," Jonathan Lovvorn, vice president and a chief counsel for the Washington-based group, said in a statement. "Rather than implementing humane reforms, Perdue has simply slapped 'humanely raised' stickers on its factory farmed products, hoping consumers won't know the difference."

Perdue follows animal welfare guidelines put out by the industry's National Chicken Council, the suit claims, which allow for raising birds in continuous dim light, depriving them of food and water during transport to a processing plant and hanging them upside down and shackled by their legs just before slaughter. The group contends industry slaughtering techniques are inhumane, subjecting birds to unnecessary pain before killing them. 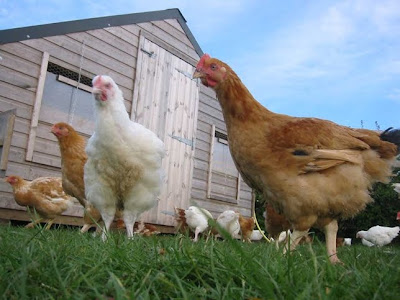 Perdue issued a statement from its corporate headquarters in Salisbury saying that its farmers' handling of their chickens exceeds industry standards, and that the Humane Society's suit is based on "narrow, arbitrary standards" of humane treatment.

"Our chickens are raised cage-free on family farms in temperature-controlled housing with a continuous flow of fresh air, and they remain free to move about with constant access to food and water," e-mailed Luis A. Luna, Perdue's vice president for corporate communications.

Some poultry companies have shifted to killing or stunning their animals with gas before slaughtering them, the Humane Society points out. Jaindl Farms, a turkey producer in Pennsylvania's Lehigh Valley, and Mary's Chickens, a free-range bird producer in California, are among the poultry producers that have switched or are in the process of switching to so-called "controlled atmosphere" killing.

The chicken council contends the industry practice of stunning birds electrically before slaughtering them is "effective and humane." The trade group says studies have found no proof that the birds are less traumatized by the gassing method that is popular in Europe and among some producers in the United States. 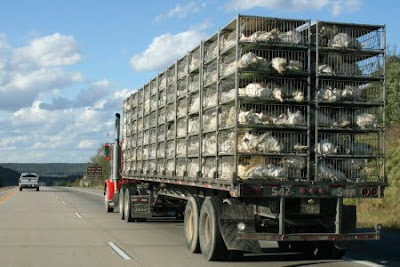 "It is no surprise that HSUS finds fault with the [industry's] program, since HSUS is dominated by animal rights advocates who object to the use of animals for food," Richard L. Lobb, the chicken council's communications director, said in an e-mail.

The Humane Society does encourage vegetarianism, but it also supports consumption of meat raised in a manner that the group believes reduces the animals' suffering.

Though the lawsuit would apply only to the marketing of Perdue poultry products in New Jersey, the humane society vice president said the group might seek to bring suit in other states with similar consumer fraud laws. Maryland, though, might not offer fertile legal ground for such a lawsuit. State law does protect against false advertising, but the claims being challenged must be provably wrong by some objective standard, according Raquel Guillory, a spokeswoman for Attorney General Douglas F. Gansler.
www.baltimoresun.com
Posted by jmmb at 7:30 AM

It doesn't surprise me that Perdue would misrepresent their product. The chicken sold under the Perdue label is hardly fit for a dog to eat much less human consumption.

I am by no means against humans eating meat, but Perdue products are the worst not only in taste, texture but also that SMELL that lingers on your hands after touching it raw. I've tried free range and organic chicken and both are far more superior.

the article says "legal ground for such a lawsuit. State law does protect against false advertising, but the claims being challenged must be provably wrong by some objective standard"

so I don't see how this law suit will fly.

This is why I think that, and it is because The Humane Society is suing for.

"falsely advertising its chickens as "humanely raised." To me the key word here is "raised"

The article then goes on to say

Well the birds are surely "all natural" and again they say "humanely raised."

The whole article, if taken in context is dealing with the 'slaughter' of the birds and not the way the birds are "raised" and the HSUS is suing for "falsely advertising its chickens as "humanely raised." as defined in the statement below.

This is deception on the part of Perdue. All they are doing is grabbing some of the chickens out of the processing line and labeling them as humanly raised and selling them under a different label so they can charge a higher price! In reality the chickens are raised no differently than those sold under the usual Perdue label. It's nothing more than defrauding consumers.
I hope this lawsuit sticks.