In Case You Missed It: Change Maryland / WSJ weekend edition / other press 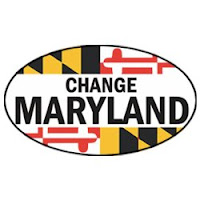 Stephen Moore: An Economic Border
War Right Under Washington's Nose
Wall Street Journal 8.24.12"Change Maryland's study suggests that higher-income residents are voting with their feet to avoid Mr. O'Malley's taxes. Virginia had a net in-migration of new taxpayers over the same period, according to the IRS."http://online.wsj.com/article/SB10000872396390444358404577608942254374370.html
The Virginia-Maryland Border War Bacon's Rebellion 8.24.12"The trick to achieving prosperity in the 21st century is to create communities attractive to the creative class while also keeping taxes lower and letting wealth creators keep more of their wealth." http://www.baconsrebellion.com/2012/08/the-virginia-maryland-border-war.html
The jobs governor? Must be Bob McDonnell (or Rick Snyder)

"You know, it’s like a cat cornering a mouse. He paws at it a little and rolls it around, but sooner or later the cat will get tired of playing and finally take care of the doomed rodent. Martin O’Malley’s record is that little squeaky thing trapped in the corner."http://monoblogue.us/2012/08/22/the-jobs-governor-must-be-bob-mcdonnell-or-rick-snyder/

“O’Malley has no business going on national TV talking about the economy, especially with Gov. McDonnell who is pounding our state into submission on job creation, said Hogan, the founder of Change Maryland who gave O’Malley a bloody nose about jobs on national TV last month."http://marylandreporter.com/2012/08/20/fighting-irish-omalley-mcdonnell-biden-ryan-and-hogan/


Maryland vs. Virginia:  A Case Study in one State's Economic Mismanagement
Politics, Movies and Sports 8.20.12
"Both states rely heavily on their proximity to Washington DC and the federal government to drive their economies, but Maryland has trailed noticeably behind Virginia in most key economic indicators in recent years."
http://pmands.com/dems-poor-tax-and-spend-economic-policies-show-clearly-in-md-vs-va/

Maryland's Unemployment Rate Edges up to 7%
Bay Net 8.17.12
"This is not nearly enough job growth to say we're competitive in the region," said Change Maryland Chairman Larry Hogan. "And a spike of half a point in the unemployment rate since the beginning of the year is a disturbing trend to say the least."


Marta Mossburg: Of all the problems in the world, Maryland is fixated on gambling and pit bulls?

Baltimore Sun 8.14.12
"Governor O'Malley personally attacked Larry Hogan of Change Maryland for publishing federal data showing people migrating out of Maryland, but he did not address why people are leaving."

“We’ve pulled back the curtain on the dismal results of this Administration, and Governor O’Malley doesn’t like it,” said Change Maryland Chairman Larry Hogan. http://monoblogue.us/2012/08/08/maryland-activists-hit-20k/


O’Malley’s Battle with Change Maryland Boosts Membership to over 20,000
Jackie Wellfonder: Raging Against the Rhetoric 8.7.12