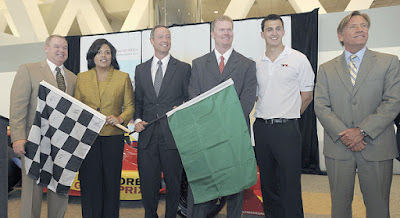 Flanked by racing stars Al Unser Jr. and Graham Rahal, officials proclaimed the Baltimore Grand Prix a "game-changer" that they said would inject millions of dollars into the city's economy.

"It will bring eyes from all around the world to Baltimore and to Maryland," said O'Malley, who compared the race's impact to the Preakness.

The three-day event, which will include an auto show and races leading up to the Indy Racing League-sanctioned competition, is scheduled for the first weekend in August 2011, and to return to the city each of the next four years.

Officials estimate the race will draw more than 100,000 visitors to the city and generate hundreds of millions of dollars in ticket sales, hotel stays and restaurant meals. O'Malley said the race would support 400 jobs and produce $65 million to $70 million in economic impact.

City transportation director Alfred H. Foxx said the contract to build the 2.4-mile course, which will wind along Pratt, Light, Conway and Russell streets, with a pit stop by Camden Yards, would likely be awarded late this summer. 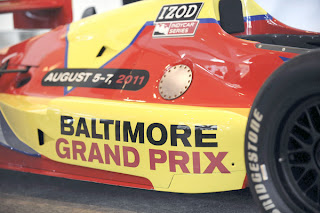 Surveying and planning will begin in the fall, and construction will start early next year, he said. Some streets will need to be widened, especially to accommodate passing at turns, and the light rail tracks will need to be altered, he said.

The city has dedicated $7.75 million in state and federal money for the roadwork. Baltimore Racing Development LLC, a private company, will pay the Indy Racing League about $2 million each year to host the event and will share the profits from ticket sales.

The group will spend about $14 million to prepare for the race and pay the city a $250,000 annual fee and a percentage of profits.

Martyn Thake, who has been hired to design the race course, said he has drawn up plans for more than 30 racetracks but is most excited about Baltimore's course.

"I think this location has the ability to be an East Coast Long Beach," he said, referring to the 37-year-old California course considered the grandfather of American street racing. "It's going to look so freaking sexy on TV — the water, the ships, the buildings."