SNOW HILL – A Pocomoke man, one of three arrested in connection with an armed robbery spree in the south end of Worcester County in June, pleaded guilty last week to one count of conspiracy to commit robbery and was sentenced to 12 years in jail, half of which was suspended.

Around 11:35 p.m. on June 9, the clerk of the Goose Creek convenience store in Pocomoke was attempting to lock up for the night when she was confronted by three masked men who had just entered the store. One of the men was brandishing a handgun and all three demanded money from the clerk while one of the suspects pointed a gun at her, according to police reports. The suspects were able to get an undisclosed amount of money from the clerk before fleeing the area on foot.
During the subsequent investigation, it was learned that about 30 minutes earlier, the manager of a Pizza Hut restaurant nearby had contacted the Pocomoke Police Department to report three masked men had attempted to rob him at gunpoint as he closed the business for the night. The store manager was able to get into his car unharmed and drove away.
The information obtained from the Pizza Hut manager matched the information provided by the Goose Creek clerk in terms of physical descriptions of the suspects and the types of clothing they were wearing at the time of the armed robberies. Based on the information provided by the victims, Worcester County Bureau of Investigation (WCBI) detectives were able to identify three suspects, including Dexter Wise, Jr., 23, of Laurel, Del.; Decarlo Marcus White, 19, of Pocomoke; and Dorian Rashawn Johnson, 19.
Warrants were sworn out on the three suspects and each was arrested a short time later. Each of the suspects were charged with 23 total counts including armed robbery, first-degree assault, reckless endangerment and conspiracy to commit armed robbery.
Last week in Circuit Court the first of three suspects, Wise, pleaded guilty to conspiracy to commit robbery and was sentenced to 12 years in jail, of which six months were suspended, netting Wise six years in jail. He was also placed on probation for two years after his release and was given credit for the 118 days he spent in jail awaiting trial. Wise was also ordered to pay roughly $1,500 in combined restitution to the victims, Goose Creek and Pizza Hut.
White is expected to appear for trial for his role in the robberies on Jan. 10, while Johnson’s trial is scheduled for Jan. 12.
www.mdcoastdispatch.com
Posted by jmmb at 10:29 AM No comments: 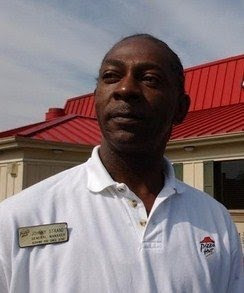 ONLEY -- Surrounded by family members and friends, Shakia Austin of Melfa sat inside the Pizza Hut restaurant patiently waiting to see the building be dedicated to her late uncle, Johnny Strand.

Matching her mother and several others in attendance Saturday, Austin wore a white T-shirt printed with a picture of Strand and the nickname, "Uncle J" written beneath in cursive letters.

More than 30 people gathered inside the restaurant to attend the dedication ceremony to Strand, a former manager there well-known for his kind personality and generosity.

Strand, who had worked at Pizza Hut since it opened in 1990, was slain three months ago. Shortly after he was reported missing, the 49-year-old manager was found dead inside his Melfa home May 1.

Fernando Carrillo Sanchez, 23, of Accomac was charged with second-degree murder after being located by nearby residents, according to the Accomack County Sheriff's Office.

As a way to help remember Strand and his many contributions, a small plaque was recently made and affixed to a dining room wall inside the restaurant.

Pizza Hut employee Jason Bennett of Onancock, who had worked with Strand for five years, reflected on Strand's cheerful and encouraging attitude while he waited for the plaque to be unveiled by District Manager Gil Liberty.

"He had a smile on his face every morning," Bennett said. "And he always strived for the best in us."

"He meant so much not only to this restaurant but so much to our franchise as a whole," Liberty said.

In addition to the plaque, a scholarship fund in Strand's name is also in the process of being established.

According to Liberty, the fund will be awarded each year to one senior each from Nandua and Arcadia high schools who "understands what kindness is," just like Strand had.

Liberty hopes several individuals will make donations so students can apply for the scholarship next year.

Once the plaque's covering was removed by Liberty, Strand's former co-workers, friends and family members lined up to see the small nameplate on the wall beside the kitchen door --a spot where Strand stood as he greeted customers.

"Welcome to Johnny's Place," the plaque reads, written below a picture of Strand standing in front of the restaurant.

Last month, Austin began working at Pizza Hut because she felt that working there is what Strand would've wanted.

She's working toward following in her uncle's footsteps and "making the service great" for customers.

"I know he's smiling down on me telling me I'm doing a good job," said Austin.