Oil Spill Became Too Much For Boat Skipper 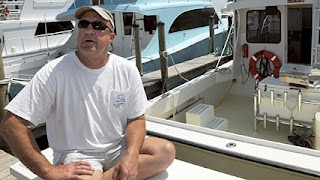 (June 24) -- Two weeks after he was hired by BP to help with the oil spill cleanup, William Allen Kruse killed himself.

The 55-year-old charter boat captain shot himself in the head Wednesday morning as he prepared to spend another day skimming oil off the waters of the Gulf of Mexico, clearing the spill that threatened to destroy his livelihood and community.
Kruse left no note, so it's impossible to know why he took his life. But those who knew him say the veteran fisherman and father of four was almost certainly the latest casualty in the gulf oil crisis, and a symbol of the spill's exacting human toll.

"There's not a doubt in my mind, the oil spill was the cause of this," Tom Ard, who fished alongside Kruse for 25 years, told AOL News this morning. "It was just too much for him."

In a phone interview, Ard, 39, the president of the Orange Beach Fishing Association, said Kruse was in his prime when he killed himself and had been enjoying taking his 13-year-old son out on his boat to teach him how to fish.
"He had everything going for him. He was at the top of his game," Ard said. "He was the kind of guy that made everyone smile, and he was one heck of a fisherman."

In Orange Beach, Ala., where Kruse ran a sport boat business for more than two decades, acquaintances of the man known as "Rookie" said he did not have any psychological problems. And many said he was no more devastated than anyone else in the community, which has been hit hard by the spill.

"He didn't show any signs he was going to do this that would have thrown up any red flags where you'd think you better keep an eye on him," Jason Bell, Kruse's co-captain, who knew him for a decade,told the Press-Register of Mobile, Ala.

"He wasn't any more aggravated with the whole situation than any of the rest of us," Bell said. "I hate to say it, but I'm surprised something like this hasn't already happened."

Bell said Kruse had planned on retiring soon. He declined comment this morning.
Ard described a community under a severe amount of stress that doesn't know what will become of businesses that have been in families for generations.

"This is something that you put your whole life and soul into. You've done it for 25 years. Just the thought of all that gone, when it's not your fault, you didn't do anything wrong ... that's a lot of stress," he said.

Ard is grateful to have been hired by BP to help in the cleanup efforts, but said the oil spill has threatened an entire way of life.

"The cleanup is all we've got right now. It's the only work here," he said.

The death of a second cleanup worker Wednesday was unrelated to the spill. The unnamed worker drowned in a swimming pool accident. But when Coast Guard Adm. Thad Allen announced the deaths at a press conference Wednesday, they seemed to emphasize the human cost of the crisis anyway.

"On a more somber note,we had two deaths reported on people that were involved in this response earlier today," he said. "Our thoughts and prayers go out to their families. We know this is a devastating thing to happen."

A BP official told AOL News today the company extends its condolences to the families.

Until now, the psychological toll of the disaster has not been widely discussed, but experts say the oil spill could cause emotional and social devastation in communities along the gulf.

Ard said the emotional toll of the spill killed his friend. "It's been a ton of stress on all of us," he said. "I guess everybody handles stress differently. And I guess he went off the deep end."

The Washington Post noted that Dr. Howard Osofsky, a Louisiana State University psychiatrist, said he'd noticed "an increase in suspiciousness, arguing and domestic violence" among those affected by the spill.

In Kruse's case, the boat captain had asked his staff to help him prepare to go out on the water one more time when he apparently chose to take his life instead.

"He had just let his deckhands off the boat and sent them to get something," Baldwin County Coroner Rod Steade told the Press-Register. "He was going to meet them at the fuel dock. They heard a pop, and when the boat didn't come around, they went back and found him."

Bell remembered Kruse as a kind man. "Even in the wintertime when things got tough, if you needed a little extra cash, he was always like, 'Here, take it,'" he said.

The community where Kruse lived is in mourning. But Ard said the town would recover.

"We are a very resilient bunch. We've had to deal with hurricanes and fishing closures and everything. I truly believe we'll all be fine. This morning we all went up, and we got to work," he said.
www.aolnews.com
Posted by jmmb at 7:10 AM