60 Pianos In The Steets Of New York 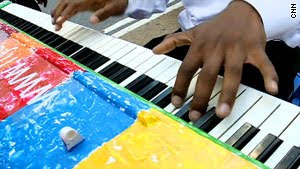 In a collaboration between artist Luke Jerram and charitable organization Sing for Hope, 60 newly refurbished pianos were installed in public spaces throughout the city's five boroughs. "Play Me, I'm Yours," the brightly colored instruments announce provocatively.

But the New York installation is his largest yet -- "twice the size of any installation I've done before," Jerram said.

In New York, no public space is too humble for a piano: The instruments have been placed at a post office (Jackson Heights, Queens), a zoo (Staten Island), churches (St. Mark's Church and the Cathedral of St. John the Divine in Manhattan), and a boardwalk (Coney Island, Brooklyn), among other locations.

A full list of the piano's positions can be found online at www.streetpianos.com/nyc2010/ -- a site where the public is encouraged to upload and share videos, photos and stories about their encounters with the city's pianos.

The pianos come with no conditions attached -- the project insists that "who plays them and how long they remain is up to each community." 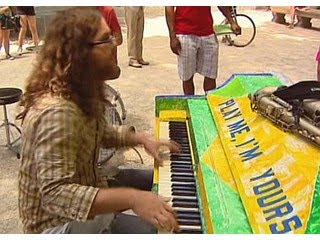 Jerram said that the "energy, enthusiasm, and go-getting spirit" of New Yorkers characterized the city's response to the installation, as aspiring and professional musicians alike flocked to the pianos Monday.

How will Jerram know the project has succeeded? "It comes down to people's stories," he said. "I think it's the stories that will come out over time -- how people have connected, how it's changed people's lives, how they think about music and sharing that music," he said. "There were two people who met over the pianos in Sydney and they just got married."

Later this year a new array of pianos will be installed in London, while Belfast, Ireland; Burnley and Blackburn, England; Cincinnati, Ohio; San Jose, California; and Grand Rapids, Michigan, also will be getting pianos of their own.

At the project's conclusion, the pianos will be donated to schools and community groups.

What a wonderful idea for any city street!