Few people could compare being a firefighter and a professional football player, but former Ravens long snapper Joe Maese knows they have one thing in common.

"The biggest thing is that you need to be professional," said Maese, a firefighter for Long Reach Station 9 in Howard County. "You go through all those practices, meetings and all of that training. There might be that one fire a year, which is like having that one playoff game, and you had better [have] done your homework and be prepared. If not, you could be in a lot of trouble."

In the NFL, few players make the successful transition from player to another professional career, and even for those who do, it's not always easy. And then there is Maese.

From 2001 through 2004, Maese was the Ravens' long snapper, and he played one season after that in Detroit. Maese always wanted to be a firefighter when he was a child. A career in the NFL didn't become a dream until he was a junior in high school.

"That's all I thought about when I was a kid," Maese said. "It kind of gets in your blood and runs in the family. If you look back, there is usually a history of uncles, grandfathers and fathers who have been firefighters."
In Maese's case, it was his father, Joseph, who has been a fireman in Phoenix the past 23 years. Obviously, Maese hung out at the fire hall with his dad when he was younger, and those impressions were deeply rooted.

"There are a lot of similarities in football and firefighting," said Maese, "especially as far as camaraderie and teamwork. Both are blue-collar in nature because it's physical work. Both can be extremely emotional, but in both sometimes you have to keep the emotion under control."

It didn't take Maese long to learn that as a firefighter. He has been in the department for less than a year, but on his first day on the job he had to answer a call about a teenage suicide.
Since then, he has been involved in his share of fires, nasty automobile accidents and medical assistance calls. That's where the comparisons to the NFL end.

One is a game played by grown men, and the other is about life and death.

"I guess when you've been around this kind of work most of your life, it's easier to walk away from things that happen on the job," Maese said. "I've never been the kind to take work home with me.
"Even when I played in the NFL, I eventually couldn't see myself doing anything different than I do now," he said. "I always knew I wanted to help somebody. It wasn't about money, but doing something constructive with my time."

Maese tried to prolong his NFL career. After Detroit, he spent a year getting various tryouts but couldn't catch on with another team. He even spent a season playing indoor football with the Baltimore Blackbirds.

Who could blame Maese for trying to hang on?

Being a long snapper was an ideal job. He didn't make the big money or have the publicity of a quarterback or running back, but his salary was still larger than the average person's. Besides, a long snapper's body doesn't take the abuse of a regular starter on offense or defense. 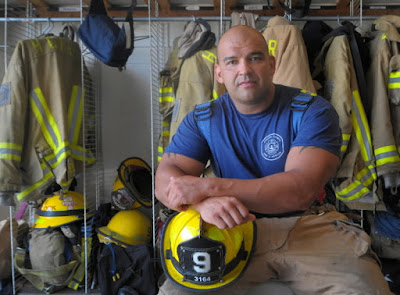 Maese traveled the country, stayed in nice hotels and got most of his meals free. The only time he ever got attention was when he messed up, and that didn't happen often, especially when you have a kicker the caliber of Matt Stover.

Maese acknowledges that he made enough money playing pro football that he didn't have to work again. He had a house here in Maryland and another one in Phoenix. But something was missing.

"It's tough to walk away from the game, especially when you didn't have an injury," Maese said. "For years, I just went to work and had a great group of guys to work with, like Matt Stover. You get different tryouts, but sometimes they weren't looking at you, but a kicker."

Even before Maese entered the NFL, he had prepared to be a firefighter. At age 19, he had earned a fire science degree from a college in Phoenix. He got sidetracked from that when the Ravens made him a sixth-round pick in 2001 out of New Mexico.

But soon after his NFL career ended, Maese was back in school, this time at the academy in Howard County. Before joining Station 9, he spent five months training in various areas from swift-water rescue to working with hazardous materials and weapons of mass destruction.

Maese said he expects to spend the next 25 to 30 years as a firefighter. There are still times, though, that he gets questions about playing pro football. He says he is in better shape now endurancewise than when he played in the NFL. At a rock-solid 6 feet 1, 260 pounds, he stands out on a firetruck.

Maese still snaps the ball and he might try out again.

"I've always wanted to live a simple life," he said. "When I was in my second or third year, I only wanted to own a house and truck. If I got another opportunity, I'd consider it."

www.baltimoresun.com
Posted by jmmb at 8:05 AM