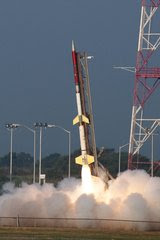 College students are looking forward to studying their experiments being carried in a suborbital rocket launched from Virginia's Eastern Shore.

The Terrier-Orion suborbital sounding rocket launched Thursday morning from NASA's Wallops Flight Facility. The rocket was estimated to be traveling more than 2,650 miles per hour less than a minute into the launch.

The rocket carried 11 experiments that were developed in part with a weeklong workshop on how to build small experiments for launch aboard suborbital rockets.

A boat was to travel more than 40 miles from shore later Thursday to retrieve the rocket from the water. The students whose experiments were on board will have them returned for study.
www.shoredailynews.com
Posted by jmmb at 6:06 PM