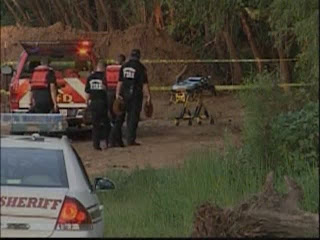 SHREVEPORT, La. (AP) - Six teenagers who could not swim drowned in a northwest Louisiana river during a family outing, falling into deep water from the shallows where they were wading.

Officials planned to hold a news conference Tuesday to release more details about the deaths of the six, who drowned Monday in the Red River in an area where sand bars gave way to 20-foot depths. A seventh teen, a 14-year-old, was rescued.

Shreveport Assistant Fire Chief Fred Sanders said he believed the victims, ages 13 to 18, included three brothers from one family and a sister and two brothers from another.

"They were out here with some adults. But unfortunately, neither the children nor the adults could swim," he said.

Sanders said names may be released Tuesday, after the department is sure relatives have been notified.

The teens had started playing in a familiar area but ended up at a spot in the river where the bottom fell suddenly and that's where divers found the bodies, Sanders said.

Marilyn Robinson, a friend of the families, told The Times of Shreveport she watched helplessly as the victims went under. She said a large group of family and friends, including roughly 20 children, were out at the sandbar to barbecue and have a good time. They frequent the area and were familiar with the water, Robinson said.

"None of us could swim," she said. "They were yelling 'help me, help me. Somebody please help me.' It was nothing I could do but watch them drown one by one."

Sanders said he did not know whether one teen fell and pulled down others, or if they were trying to rescue each other.

It took more than three hours to find all the bodies, he said.

"It's devastating," Sanders said. "To my knowledge the city has never experienced an incident of this magnitude."

Rescue crews were delayed a bit because the accident was reported as near the Jimmie Davis Bridge but was nearly a mile away, Sanders said.

The families were in a recreational area of the Red River that has sand bars, Sanders said. The park is a popular picnic and fishing area and some people do go wading.