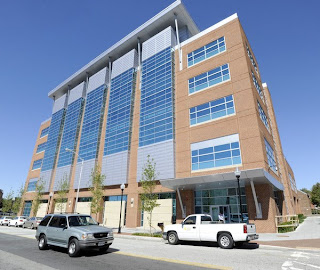 The dead won't know the difference.

But the pathologists and technicians who investigate Maryland's 4,000 unexpected deaths each year are said to be "giddy" about the opening of the state's new, $54 million Forensic Medical Center in Baltimore.

The state-of-the-art facility, which fills a city block at West Baltimore and Poppleton streets, will replace the 41-year-old building at Pratt and Penn streets that presently houses the Office of the Chief Medical Examiner. It is designed to improve working conditions and speed the autopsy process for families and law enforcement.

The new, six-story building, formally opening today, triples the state agency's floor space, providing state-of-the-art technology to boost efficiency. The old facility was built for 2,000 autopsies a year and now has 16 examiners doing 4,000 annually in a basement room. The new building has enlarged, brightly lit space for up to 23 medical examiners to perform up to 6,000 autopsies a year as the demand grows. The first autopsies in the new space are expected by mid-October.

"The volume of cases downstairs sometimes is overwhelming," said Dr. Mary G. Ripple, the deputy chief medical examiner. When medical students, police academy classes and others come to learn, "there's not a lot of room to move around."

The new center is wired with fiber-optics for digital record-keeping, photography and consultations. There is a full-body CAT-scan to speed autopsies — one of just two in M.E. offices in the U.S. There are bigger and better-equipped labs, six autopsy stations capable of handling some of the most dangerous pathogens, and refrigeration for more than 120 bodies. And, the autopsy space can quickly be tripled in the event of a mass-fatality disaster.

For families of the deceased, there are more-comfortable, private places to speak with pathologists, or to view or post a watch over the bodies of their loved ones, as some faiths require.

Chief Medical Examiner Dr. David R. Fowler, who has worked on the project for years, said the center's opening "really hasn't sunk home yet." But for his staff, the anticipation is keen: "The look on their faces is just lovely to see."

It has been a long time coming. Fowler said it was his predecessor, the late Dr. John Smialek, who began pressing for improvements more than 20 years ago.

In 1985, the Post Mortem Examiner's Commission described the old facility as underfunded, understaffed and insufficiently equipped. By 1988, demoralized employees were threatening to unionize. They complained of crippled heating and cooling systems. Poor ventilation in the basement autopsy areas sometimes allowed nauseating odors to filter into office space.

The state eventually spent about $2 million on upgrades, Fowler said. But "the number of cases we were seeing was increasing," adding nearly 100 cases annually. Maryland's population is growing and aging. And, except during economic slowdowns, vehicle fatalities have also increased. 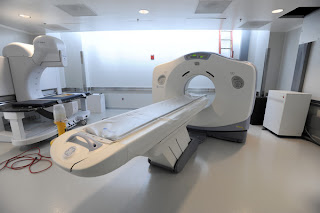 Alvin C. Collins, secretary of Maryland's Department of General Services, which managed the project, called the new Forensic Medical Center "the most modern medical examiner's facility in the United States."

Only the Los Angeles M.E.'s office is bigger, Fowler said. Most states divide up the work by region or by county. Maryland, being small, is able to bring all its cases to Baltimore. And that, he said, provides taxpayers with important economies of scale.

A survey 10 years ago found the average medical examiner's office cost $2 per citizen to run for a year. Maryland's today still costs less than that, about $1.74 per citizen per year, Fowler said.

The new center's showpiece may be its twin autopsy rooms. The old facility had six stations in the basement. The new rooms have eight stations each, set on opposite sides of large, south-facing spaces with 29-foot ceilings and soaring windows.

"We wanted natural light," Fowler said during a preview Monday. Each station is equipped for digital photography, and "even with the lights off, it's bright."

Above the autopsy tables, there are glassed-in galleries for medical students and interactions with police. "That really improves the final outcome with criminal justice cases," Fowler said.

Ripple described the mood among the assistant M.E.'s as "excited trepidation." The move will be "a little chaotic … but extremely, extremely exciting."
www.baltimoresun.com
Posted by jmmb at 8:00 AM