I live in the Elk Creek subdivision which is across Jackson Road from the Deer Harbor subdivision.

Beginning about two months ago, we in Elk Creek noticed that someone had been taking craps in our neighborhood.  Not in the woods or in the grassy areas, but in the road and leaving toilet paper with it.  For almost two weeks straight, about every other day, they left 9 craps.  Then it stopped for several weeks. 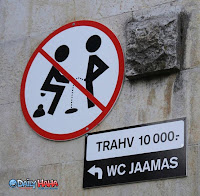 Then we noticed the person or persons did it several times in Deer Harbor.  This is a very strange situation, so it has been the topic of conversation.  I had been talking to a friend about it and she told me the same thing had been happening down her lane.  She lives in Rehoboth Maryland and her lane runs along the river.
The person had been going on her lane, not in the woods or grassy area and the person also left toilet paper.

On one of the occasions, the person dropped their driver's license and credit card out of their pants pocket.  My friend said she did not recall the name of the person, but that she had her friend take it to the MSP barrack.  It turned out the id and credit card belonged to a Daily Times delivery person.

I've talked to Gary Baker and Mike Lewis about it, they've provided extra patrols for the past few months, but haven't been able to catch anyone.  Plus, unless you catch them in the act, what's the crime.  It's just soooo nasty.  Not that I'm an expert on poop, but it's not like dog poop that disintegrates and goes away after a few days.  The crap that's in the street at the front of our neighborhood is still there after two months.

My neighbors and I have talked about doing a stake out, but it's so sporadic.  The last poop was on 3/17 in Elk Creek in the street at the front of the neighborhood.  There is one today in Deer Harbor on Five Friars Road on the left as soon as you turn off Deer Harbor Drive.  We were trying to see if there was a pattern, but I don't think there is.  Any thoughts?

Do you really believe this to be true?

Thought I really feel for the people who are finding the poop, I still can't help but laugh.

If it IS a true story this sorry soul is in desperate need of medical attention.

I can't imagine taking the time to go around and counting piles of human poop. If you know who this person is for goodness sakes leave him a pooper scooper and a bag. That should ease your troubles.

I put a bunch of papers and envelopes in the pocketbook just like a ladies pocketbook would have but I put a surprise and I do mean a nice BIG surprise in the bottom of the pocketbook for anyone that stole it and started digging through it hoping that they would find money, well what they found was not money.

Then I sat back and filmed what happened. It was the funniest thing I think I have ever seen.

I'll do my best to find the old one, it just wouldn't be the same to do it again. That video is truly one of the funniest things that I have ever seen.

How did you get the "surprise" into the pocketbook in one piece without getting your hands messy?

I used a pooper-scooper

I don't think you could have picture a better picture to describe the matter.

I really hope you guys find this guy it is too bad the person didn't keep his name from the badge then you could get a group together and pay for private investigator.