If you've spent alot of time on the local beach and have been paying attention to what is on the sand - or maybe even floating in the water- you have seen these.  I've seen them in the past up and down the beach after a hurricane or nor'easter.  The objects that don't find their way back out into the ocean dry on the beach and when dry become stone-like..  In fact, if I searched long enough through shells and stones gathered long ago by my now adult children I'm sure I could find some.

If you want to think they smell like p***, go ahead. 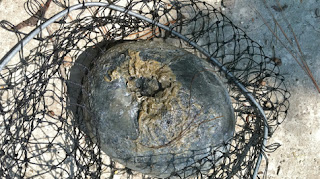 Most of Hurricane Irene’s impacts—heavy rain, high winds, downed trees, coastal erosion, and storm-tide flooding—are all too familiar to the storm-weary residents of Chesapeake Bay and the Eastern seaboard.
But based on post-storm queries to the Virginia Institute of Marine Science, one impact remains a mystery—what are all those “gray blobs” floating atop waterways and strewn along beaches?
Blob reports and queries have been streaming into VIMS since Irene passed by on the last weekend of August. The blobs—encountered by boaters and beachgoers in Hampton Roads, Mobjack Bay, the Poquoson River, the York River, and as far away as Long Island—have been described as being of “various sizes,” with the smallest “around the size of a baseball.” Reports of their texture range from “kind of rubbery or leathery” to “kind of soft.” They’ve also been described as “ash gray” and “foul smelling." Cathy Hopkins of Hampton reports that they're "pretty gross.”
Theories about what the objects might be are as numerous as the incoming reports: Old crab floats? Sewage? Tar balls? Ambergris from whales? Sea turtles?
VIMS professor Emmett Duffy has a simpler explanation. “They’re potato sponges” says Duffy, a self-professed “friend of the sponges” who is renowned in marine science circles for his discovery of complex, cooperative societies among sponge-dwelling Caribbean shrimp. 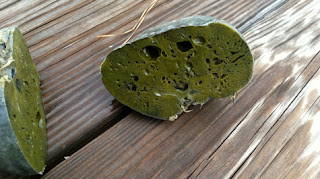 Duffy explains that like other sponges, potato sponges make a living by filtering microscopic food from seawater. They draw the water into and through channels in their porous bodies by the beating of countless tiny hairs (flagella) on their cells.
Potato sponges, which comprise a diverse group within the genus Craniella, are normally inconspicuous animals (yes, they are animals) that inhabit shallow coastal habitats around the world, growing to about the size of a soccer ball. They look like, well, potatoes and attach to the seafloor with a network of protein fibers and glassy, needle-like “spicules” that form something like an anchor.

But when weather conditions cause large waves and strong currents to scour the seafloor, they can dislodge large numbers of these sponges, freeing them to float to the surface and wash ashore. Clogged with storm debris and no longer able to filter feed, the sponges die. Then they start to smell as decay and bacteria move in to consume the carbohydrates and collagen that form their body.

Potato sponges are not poisonous—Dr. Duffy even found a recipe for potato sponge cake on the Food Network (but it turned out to require regular potatoes). Nevertheless, VIMS scientists caution area residents to avoid touching them as a precaution, as their glassy spicules can irritate the skin and eyes.

Source;  http://www.vims.edu/newsandevents/topstories/irene_blobs.php
Posted by jmmb at 9:19 AM