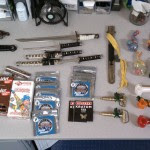 Even though the Ocean City Mayor and Council recently banned the sale of all synthetic drugs in the resort, some businesses are continuing to sell them anyway.
On Tuesday, undercover Ocean City Police Department detectives conducted a compliance check at the May Talk store on Atlantic Avenue.

The officers were able to purchase K-2 and an employee also told them how to use the drug in a pipe to get high.

Officers went back to the store with a warrant on Thursday and recovered several items including K-2, Salvia, bath salts, CDS paraphernalia and several fixed-blade fighting knives.

The Ocean City Mayor and City Council recently passed an emergency ordinance banning the sale of synthetic drugs including K-2.


On Tuesday September 13th undercover OCPD narcotics detectives conducted a compliance check at the “May Talk” retail store.
Narcotics officers purchased K-2 from a “May Talk” employee who told the undercover officers the K-2 was illegal but agreed to sell it to them anyway. The store employee also sold the officers a pipe, which is considered paraphernalia.  The employee explained to the undercover officers how to use the K-2 and the pipe to get high.  The owner of the establishment was present at the time of the transaction.
On September 15, 2011, at approximately 1 p.m., OCPD personnel served the Search Warrant at “May Talk”.
As a result of the Search and Seizure warrant police recovered several items including:  Saliva Divinorum,
K-2, Bath Salts, CDS paraphernalia and several fixed blade fighting knives.
Charges are pending against all of the parties involved.
Since the passing of the emergency ordinance, Ocean City Police have proactively educated storeowners and managers by providing copies of the ordinances as well as conducting several checks to ensure compliance of the ordinance.   Some contraband was found in a hidden compartment in a display case located next to the cash register.  The owner admitted they have been selling the saliva in spite of the ordinance enacted banning the substance last year.

We used to grown Salvia for cooking. Europeans call it Salvia, but in this county it's commonly known as Sage.

Gosh! i thought salvia is used as a drug now you are telling that it is used in cooking ?

@Above... You are talking about the different salvia which is used as a drug like myth and heroin