News From The Great Pocomoke Fair

Here is some data I received concerning The Great Pocomoke Fair.  I had NO idea there could possibly be so many entries.  And maybe once and for all this will put a lid on alot questions people have had concerning the change of dates for the fair.


Please consider being a volunteer next year. 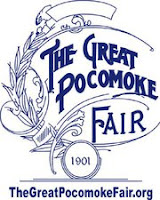 Great Pocomoke Fair
2011 Champion & Reserve Champion Winners
Narrative
The Great Pocomoke Fair is an open Fair, not a 4-H Fair. Therefore, we accept entries from the surrounding counties and states. We had entries from all three states making up the Delmarva Peninsula.
This year there were 76 participants (up from 64 in 2010) who submitted 829 entries (up from 680 in 2010) for competition. There were 38 adult participants, 14 Seniors (ages 14-18), 19 Juniors (ages 8-13), 4 Children (under 8 years old) and 1 handicapped participant.
Almost 700 entries were displayed in the grandstand building – 650 were reviewed by 6 judges on Thursday, tallied, and ribbons added by Fair opening at 5 p.m. The 49 cakes and pies that were submitted Thursday afternoon were judged Thursday evening (2 judges). There were 59 cut flower entries, 173 vegetable entries, and 155 preserving (canned goods) entries. In addition there were 77 small animals (chickens, ducks, geese, rabbits) and 54 livestock (calves, goats, sheep, swine) entries. This year animal judging occurred on Thursday evening, Friday evening, and Saturday – 131 entries reviewed by 3 judges. All of the judges for the grandstand exhibits and those tallying the entries and placing the ribbons are volunteers.
For 2011, the Great Pocomoke Fair will pay $5,944 in premiums. We will receive $1,300 from our grant from the Maryland Agricultural Fair Board. The balance we have to raise on our own. The premium checks must be issued before we can apply for our State grant.
Our kitchen made $2,066.00 and we raised $351.00 on selling the cakes and pies for a total of $2,417.00 in food sales. Someone asked a committee member why we had the food vendors instead of doing it all ourselves. Two reasons: the food vendors are all non-profits – most from the Pocomoke community and they depend on events like the Fair to raise funds for their projects – we are trying to support the Pocomoke community. #2 – VOLUNTEERS and SUMMER HEAT – we don’t have enough volunteers to prepare that much food and that kitchen is very hot in July and August – the grandstand building is not air-conditioned.
Some people thought we were crazy to change the Fair dates after 20 years. However in 2010 when we opened, Somerset schools had been open 4 days and Wicomico and Worcester were preparing to open on Monday. Somerset students were doing homework – not baking cookies and finishing craft project for the Fair. For 2011, we moved away from the opening of schools. That also meant that flowers were still blooming and vegetables were still growing and it was noticeable in the grandstand. In addition, by moving the Fair dates, at least for this year - we were not faced with an unwelcome attendee – Hurricane Irene.
By altering our entry and judging times for the livestock, for the first time our barn was full – 131 entries in all - a lot of work for Norman Ennis and his volunteers setting up the pens but a wonderful sight for the Fair committee.
The Fair dates for 2012 have been set at August 2-4, 2012. We are reviewing the schedule and discussing further modifications for 2012.
Suggestions and volunteers are welcome.
Look for the Great Pocomoke Fair on Facebook

I was suprised at the earlier date.. You always could count on the Cypress Festival opening summer and the Fair closing it. I didn't realize the Fair was even happening until two days into it because I associate it with the end of August. I hope they move it back and keep the end-of-summer tradition alive.