I suppose those doing the Hank Williams, Jr. interview on  "Fox & Friends" just about peed their expensive under panties when he belted out his comments.  The news media still doesn't get it!... and neither do some others.  Can't we be grown and sensible enough to let things like this just pass by?  Besides, isn't Williams allowed "freedom of speech"?  Where do you draw the line?  How in America can you tell someone what NOT to say?  Did anyone ever stop to think that perhaps Hank Williams, Jr.  said out loud what others have been thinking?  Maybe not in those words..................but I'll bet close enough.

I don't suppose Hank Williams, Jr. has to worry about what Obama or the American people think of him.  And I doubt seriously if his comment or removing his song from Monday Night Football will make or break him........He still has plenty of friends. 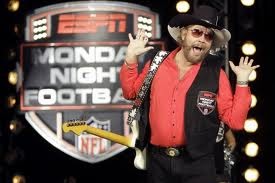 Sounds like Hank Williams Jr. is ready for some apologizing. Wait, make that a lot of apologizing.
The clearly chastened country singer has offered yet another mea culpa, after a comment he made comparing Pres. Barack Obama to Adolf Hitler prompted ESPN to pull his intro from "Monday Night Football."
In the apology, published on the singer's web site, Williams admitted that his comment was "dumb," adding, "Sorry if it offended anyone."

Williams still contended, however, that he wasn't thrilled about the concept of Obama and Republican house speaker John Boehner golfing together.

"I have always been very passionate about Politics and Sports, and this time it got the Best or Worst of me," Williams writes. "The thought of the Leaders of both Parties Jukin and High Fiven on a Golf course, while so many Families are Struggling to get by simply made me Boil over."

In an earlier statement, Williams admitted that his comment was "extreme...I have always respected the office of the President."

Williams made his inflammatory statement on Fox News talk show "Fox & Friends." Grousing about Obama and Boehner playing golf together over the summer, Williams said it was like "Hitler playing golf with Benjamin Netanyahu."

Elsewhere during his appearance, Williams referred to Obama and Vice President Joe Biden as "the enemy."
Williams' comments were enough to make ESPN yank its regular opening, which features Williams singing "All My Rowdy Friends," from this week's "Monday Night Football."

"We are extremely disappointed with his comments, and as a result have decided to pull the open from tonight's telecast," ESPN said in a statement.