As of November 30, 2011 the driving force of the strong police department in Pocomoke City, Chief J.D. Ervin, has retired.
His retirement, after 16 years as Chief of Police in Pocomoke City, was announced this past October. 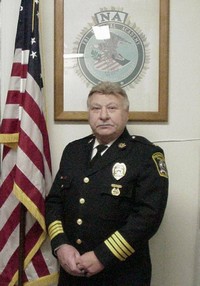 With a resume filled with acheivements in law enforcement and military, J.D. Ervin became the Chief of Police of Pocomoke City in 1995. During the years of Chief of Police it must be mentioned that his accomplishments in Pocomoke City have been many.
Responsible for many youth-related events, Pocomoke children were not forgotten. Each year Chief Ervin made things happen. The Easter egg hunt, back-to-school event, Christmas Party, a fishing program gave children something to look forward to. Irvin did it without fanfare, without any hoopla, no pat on the back. He just did it. And he leaves many children that will remember him fondly forever and perhaps changed some young lives along the way..

Just as important as the happiness of children was to him came the protection of all citizens of Pocomoke City. He worked dilegently through the years to lower crime in the city and to introduce modern technology into his Police department. His work for the citizens never ended.

Tom and I wish you well in your retirement.  May you have many uninterrupted family occasions, holidays fishing days and just sleeping days ahead of you.  I just just hope that after a lifetime of commitment to the protection of country and people you can relax.
Posted by jmmb at 7:02 AM