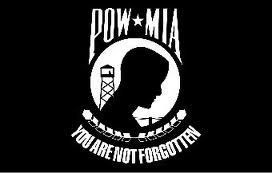 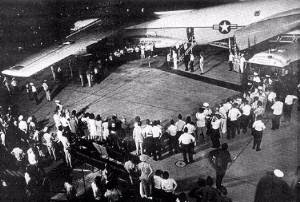 In all, 591 American POWs returned from captivity in Operation Homecoming between February 12 and April 1, 1973.
I remember watching this event unfold on the telelvision while at work.  Eventurally "Operation Homecoming" would include the POW whose name I had worn on a POW/MIA bracelet from many months.  Lt. Col Carlye S. "Smitty" Harris had grown up in the small town of Preston, Maryland with my father.

Lt. Col. Harris spent 2,871 days in captivity.  It was just a few months later that the Lt. Col. returned to Preston, Maryland and I got to meet him for the first time.

Since this time in history there have been many documented reports have been received by the United States Government stating there were LIVE American soldiers still prisoners, missing, or unaccounted for throughout Southeast Asia.  At one time the count was over 21,000.

How many are still waiting?
Posted by jmmb at 1:45 PM

I also remember watching as the first C-141 landed at Clark AFB. It was an extremely emotional event and I especially remember John McCain and his crutches.

Over the years I, too, have heard tales of Americans left behind, some of them pretty detailed. While I can't prove the stories are true, they have enough plausibility that they can not be dismissed out of hand, either.

I consider myself fortunate that I got out of there in one piece.

I had no way of knowing, of course, but thank you from the bottom of my heart for your service to this great country.

God bless you, my friend, Slim.

LOL! Thanks, but I didn't do a whole lot. Never shot at anyone and the one time I did get shot at I didn't even know it until two months later when we got a report about the "Battle of Monkey Mountain". It was then that I realized what those green bumblebees really were.