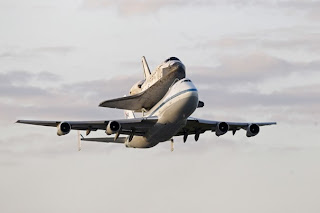 Clear skies along the East Coast put NASA’s pilots 10 minutes ahead of schedule after an early-morning liftoff from Florida’s Kennedy Space Center, leaving some spectators scrambling for a view.
Before heading downtown, Discovery buzzed Runway 1R at Dulles, cruising above a well-placed flapping American flag.
Ten minutes later, the piggybacked pair winked into view against gray clouds above the Potomac River, zooming past Reagan National Airport before banking left, circling behind the Capitol, and making the first of three runs down the Mall.
“That is just so wow,” said Martha Taft of the District, wiping away tears as Discovery zoomed over Memorial Bridge with a barely audible “whoosh.”
When a red double-decker tourist bus stopped on the bridge, blocking the view, the crowd booed. The bus moved.
“It was very cool to see how it banked. When it turned, you were able to see the whole shuttle,” said Sam Kristy, 10, whose parents, Ben and Rachel, took him out of school for the show.
On the Mall, cheers, whoops and hollers went up as the tandem flew low. 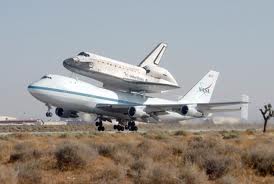 The shuttle then crossed the Potomac and flew over Arlington National Cemetery and the graves of five astronauts killed in the two space shuttle tragedies. Richard Scobee and Michael J. Smith died aboard Challenger in 1986, and David M. Brown, Laurel Salton Clark and Michael P. Anderson perished when Columbia disintegrated during reentry in 2003.
The 2,000-car parking lot of the Udvar-Hazy Center was full by 9 a.m., and an overflow crowd camped out with blankets, coolers and folding chairs on an embankment along Route 28, cameras aimed skyward, 30 minutes before Discovery’s first appearance.
Discovery made its first pass over thousands of onlookers at the Udvar-Hazy Center as children shouted, “I see it!” and adults gasped.
Centreville resident Kyle Foster said Discovery has been his favorite shuttle since watching it launch in 1984, recalling lines of cars along the Florida coast, the night’s pitch blackness and the roar of the orbiter’s engines.
Foster took the morning off from work to witness Discovery’s arrival with his wife and 1-year-old daughter, calling it a “living piece of history.”

Outside National Airport, Kristen Mitchell, 26, of Springfield, was simultaneously excited and sad, having come of age just as the shuttle program waned. “And now I’m seeing the end of it,” she said.

Just as Discovery transitions from trusty space truck to museum showpiece, NASA continues its transition phase. The 30-year space shuttle program ended last year, leaving America without the means to launch people into space for the first time since 1981. NASA now pays the Russian space agency to send American astronauts to the international space station. By 2017, NASA hopes American-built private spacecraft — financed by NASA — will take over the role of orbital taxi.
But for today, the embattled agency got to show off its space hero one last time, a 27-year-old flier whose scorched and dingy siding visually describe her duties.

“She’s old and venerable and has lots of quirks,” said former shuttle astronaut Piers Sellers, who flew on Discovery in 2006. “We had sheets of paper that said, ‘When this alarm goes off, ignore it.’ Or, ‘this fuel gauge doesn’t work.’ She just does that. She had a lot of little quirks, but her heart was solid.”
As Discovery banked around the west end of the Mall for a final pass, the battered white shuttle glowed in a shaft of sunlight, looking large and at ease — a bird with clipped wings just along for the ride.

wow I only wish I would have known I was in Richmond VA and could have made it up there, How cool that would have been.

I would have loved to have seen it too. Just think- now the USA pays Russia.