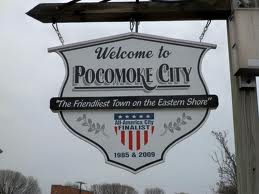 POCOMOKE CITY -- Pocomoke City's new downtown riverfront restaurant took a major step forward this week with the City Council voting to authorize the mayor's signature on a five-year lease with SMMR Inc., owners of the Back Street Grill in Salisbury.
With plans to open the new restaurant in mid to late June, the building is nearing completion. It is being funded by about $750,000 in state and federal grants, plus $150,000 to $200,000 in local funds. The final breakout depends on the success of another grant application for $63,000, according to City Manager Russell W. Blake.


The city will be reimbursed by the restaurant operator on an increasing scale beginning with about seven-tenths of one percent of gross food sales in the first year and increasing annually to 4.29 percent of up to $1 million in sales in the fifth year. Any sales over $1 million will be charged at the 1.43 percent rate. The operator will also be paying $250 per month rent beginning at the end of the first year. Blake said the new restaurant will be employing about 30 people.

The council also approved an application for $435,000 in Community Development Block Grant funding for various projects. The largest amount, $300,000, will be for resurfacing Fourth Street and other streets in eligible areas.
Another for $60,000 will fund a feasibility study of the possible re-use of the former fire house on Fifth Street and the former armory. The fire house has been vacant since the fire company moved to new quarters on Market Street. The police department will be moving out of the armory to new quarters also on Market Street in the near future.
The rest is earmarked for improvements to the downtown area -- $25,000 to replace dilapidated sidewalks and $50,000 to give assistance to buyers of vacant buildings for new business start-ups.

A resolution was passed to refinance about $1 million of the new police headquarters building with USDA funds and council approved an estimated expenditure of $17,854 for the purchase of new desks and other office furniture and supplies for the new building.
Councilman Robert Clarke was concerned about speeding on Cedar Street. He suggested the town locate three- and four-way stops along the street to help correct the problem. Suggestions were 10th Street, 11th Street, 14th Street and at Holiday Drive to stop traffic just before Pocomoke High School.
However, Mayor Bruce Morrison wanted the council to hear a presentation on radar along the street. The radar would have to be in a school zone of which there are two along the street, at Pocomoke Middle and Pocomoke High. The town would receive a large percentage of any fines imposed on speeders.
Source:
Posted by jmmb at 7:00 AM