WINDON HAS BEEN APPREHENDED. 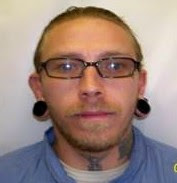 WMDT News
FEDERALSBURG, Md. - Maryland State Police are searching for an escaped inmate.
Police say 32-year-old Jeremiah Windon walked off of a job detail at a farm on Turner Road outside of Federalsburg on Wednesday.
Windon is white, about 6-feet tall, 190 pounds with brown hair and green eyes. He also has a iron cross with wings tattoo on his throat.
Police say he was last seen wearing a beige long sleeved shirt over a green T-shirt and torn blue jeans with brown leather D.O.C. shoes.
Windon is a prisoner at the Church Hill pre-release unit. He is originally from the Cecil County area.
Troopers from the North East barrack are checking locations in Elkton and North East.
Anyone with information on Windon's whereabouts should call the Maryland State Police Easton Barrack at 410-819-4747.
Source:
Posted by jmmb at 8:25 AM

He was easy to locate; they just used a metal detector to track his earrings.