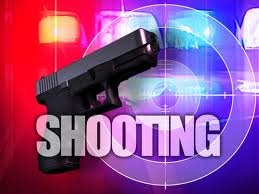 (SALISBURY, MD) – State and local police are searching for multiple suspects who were involved in a Wicomico County robbery and shooting last night in which two young men sustained life threatening injuries.

The victims are a 23-year-old male and a 16-year-old male, both of whom lived in the 1000-block of Margaret Street, in Salisbury, Md. Both victims sustained gunshot wounds. They are not being identified at this time for safety reasons.

The suspects are described as African American males, believed to be in their teens or early twenties. Two suspects were armed with guns. The armed suspects were part of a larger group of about six to eight suspects who were at or near the scene when the shootings occurred.

Shortly after 11:30 p.m. yesterday, officers from the Salisbury Police Department responded to the 1000-block of Margaret Street for a report of a shooting. When officers arrived, they found both victims lying wounded on or near the front porch of the home. Medic units responded and transported both victims to a hospital, where they remain in critical condition.

Salisbury Police Department Chief Barbara Duncan contacted the Maryland State Police Homicide Unit and requested it take the lead in the investigation. The Homicide Unit is being assisted by the Salisbury Police Department Criminal Investigation Division and the Wicomico County Bureau of Investigation. Wicomico County State’s Attorney Matt Maciarello and his staff have been on the scene throughout the night and are assisting investigators.

The preliminary investigation indicates the victims were on their front porch about 11:30 p.m. yesterday, when a group of six to eight African American males were walking down the street. Four of those males separated from the group and walked toward the victims. Two of those four males approached the victims and demanded money. Both of those suspects were armed. The shootings occurred during the robbery.

Crime scene technicians processed the scene and investigators spent the night interviewing people in the area. Those interviews will continue today as police canvass the neighborhood to develop leads.

Anyone with information about the suspects, or who may have seen suspicious persons or circumstances in the area late last night, is urged to contact police immediately. The Wicomico County Crime Solvers organization is offering a $2,000 reward for information leading to an arrest and conviction in this case. Persons with information are urged to call Crime Solvers at 410-548-1776, or the Salisbury Police Department at 410-548-3165, or the Maryland State Police at 410-749-3101. Callers may remain anonymous.