Monday Evening:
I drove over to Quiet Water Park to make a presentation to two outstanding Worcester County residents who were being awarded the 2012 Sportsmanship Award through the Maryland Dept. of Parks and Recreation. The state recognized Stephen Decatur Middle School student athlete Sarah Mitrecic and Coach Stan Parker for their commitment to sportsmanship and their pursuit of excellence.
Tuesday Morning Session:HB-75 passed this morning allowing for a change in reporting deadlines for certain utility companies. We also adopted HS-0001 which was a rebuke of certain actions taken by Delegate William “Tony” McConkey during 2012 and to accept the report of the House Ethics Committee and the recommended actions. Delegate McConkey apologized to the House members for his conduct, but also offered some defense of his actions. I voted to censure the delegate and accept the report judging his actions as wholly inappropriate. (Full Report)
Tuesday Judiciary Committee Hearings:HB-262, HB-267, HB-482, HB-483 all address synthetic cannabinoids and the distribution of faked controlled substances. The legislation seeks to outlaw all aspects of synthetic marijuana and provide the judiciary with the ability to take certain notice as the drug compounds are adjusted by the drug dealers to skirt the law. This particular drug is being sold as “bath salts” and “popery” mixes which are laced with a chemical compound designed to mimic the marijuana high.HB-338 updates the limit on felony theft to requiring a value of over $1000.00 to bring the various laws governing theft and robbery in sync with one another.HB-202 seeks to address the malicious destruction of property, specifically transit vehicles. I do not see the need for this bill when felony MDOP already exists.HB-382 would require defendants to pay into the Criminal Injuries Compensation Fund. It would expand the requirement by allowing these fees to reflect the current practice of funds being received for PBJ cases.HB-180 would provide an affirmative defense for caregivers of those individuals who acquire or provide marijuana for medical purposes to patients.HB-183 would modify the composition of the state Correctional Training Commission. It would require the Commission membership to also consist of members from within the ranks of Correctional Officers. We heard from representatives of the corrections employees who feel the strong need to have a voice at the commission level. I suggested an ex-officio status for two committee members who would be appointed from within the ranks.HB-254 would allow a local jail facility to detain individuals on Arrest documents when a District Court Commissioner is otherwise not available for a Preliminary Hearing. As written, this bill would only affect Allegany County. It is a good idea and I will be trying to see if other counties can be added to the bill.HB-311 would require a parent or care giver to report a child as missing within 24-hours and 5-hours to notify authorities upon the death of a minor child once the condition becomes known. This was crafted to address some of the issues arising from the Casey Anthony case in Florida where a child’s disappearance went unreported.HB-250 would require the victims in criminal cases being given priority in receiving compensation from a defendant before the state receives their penalties or fees. It puts victims first and gives priority for restitution.HB-219 seeks to limit the use of “No-Knock” Search Warrants without prior notification being given to local authorities. The bill would require that the Sheriff of a jurisdiction would need to be notified prior to the execution of a “No-Knock” Warrant.  These are warrants that are issued which do not require the police to “knock and announce” their presence prior to executing a warrant.HB-377
seeks to codify the procedure for using GPS tracking technology in criminal investigations. This bill would require law enforcement to secure a court order in order to capture this information.
Wednesday Morning Session:
Several House of Delegates Awards were presented this morning. The Speaker’s Medallion was presented to John M. Colmers from John Hopkins. The Thomas Kennedy Award was presented to the late Delegates Howard P. Rawlings and Jean B. Cryor. The Caspor R. Taylor Jr. Founders Award was presented to Delegate Veronica L. Turner (Prince Georges Co.).

Photo: Here I am with Delegate Smigiel and Delegate Norman waiting to get started.
Thousands turned out for a pro-gun rally on the mall conducted at noon. It tied in with the first hearing in the Senate of SB-281, the O’Malley-Brown Gun Bill. While thousands attended the rally, thousands more signed up to speak in the Senate. Just before we began speaking to the crowd, a beautiful American Bald Eagle circled overhead…not a familiar site in downtown Annapolis to be sure, but an incredible omen for those attending. I’m quite sure that for every thousand that attended, there were another 10,000 that wanted to be there to raise their collective voice against this bill.

Surely there are areas where we could work to make things better for gun owners and our communities, but much of the bill is cosmetic. Banning one type or class of firearm over another is not going to get the job done and is a fool’s errand. Portions of the bill address mental health issues, which we could focus on this year, but much of the bill misses the target. I spoke to the folks as did many other lawmakers and grass roots organizers and it was wonderful to see such a passionate response. I tell you, it made those senators take notice. If we, as citizens, responded more passionately about the other areas of life that come under attack by our elected officials, our Maryland would be a much better place to live and raise a family.
Wednesday Judiciary Committee Hearings:
HB-129 would create a task force committee to study the implementation of a right to civil counsel in Maryland. The principal would be to create a mechanism for providing legal counsel for civil litigants so lower income citizens could have assistance in cases involving basic needs and services. This type of bill will be hamstrung by funding issues, but the concept should be studied.
HB-130 addresses the issue of awarding attorney fees and expenses by the courts. The advocates testified that many cases do not move forward since they are not monetary based and the attorney would have difficulty taking such a case due to the financial implications. This bill would allow a Maryland judge to allow for the awarding of attorney fees in such cases is deemed appropriate by the court. There is some degree of confusion as to what courts this might apply.
HB-186  would create a Law Enforcement Training and Technology Fund by assessing a $5.00 fee on court costs for traffic violations. The money collected would be distributed to the counties through the Governor’s Office of Crime Control. This fund exists within the governor’s budget, but has never been funded. 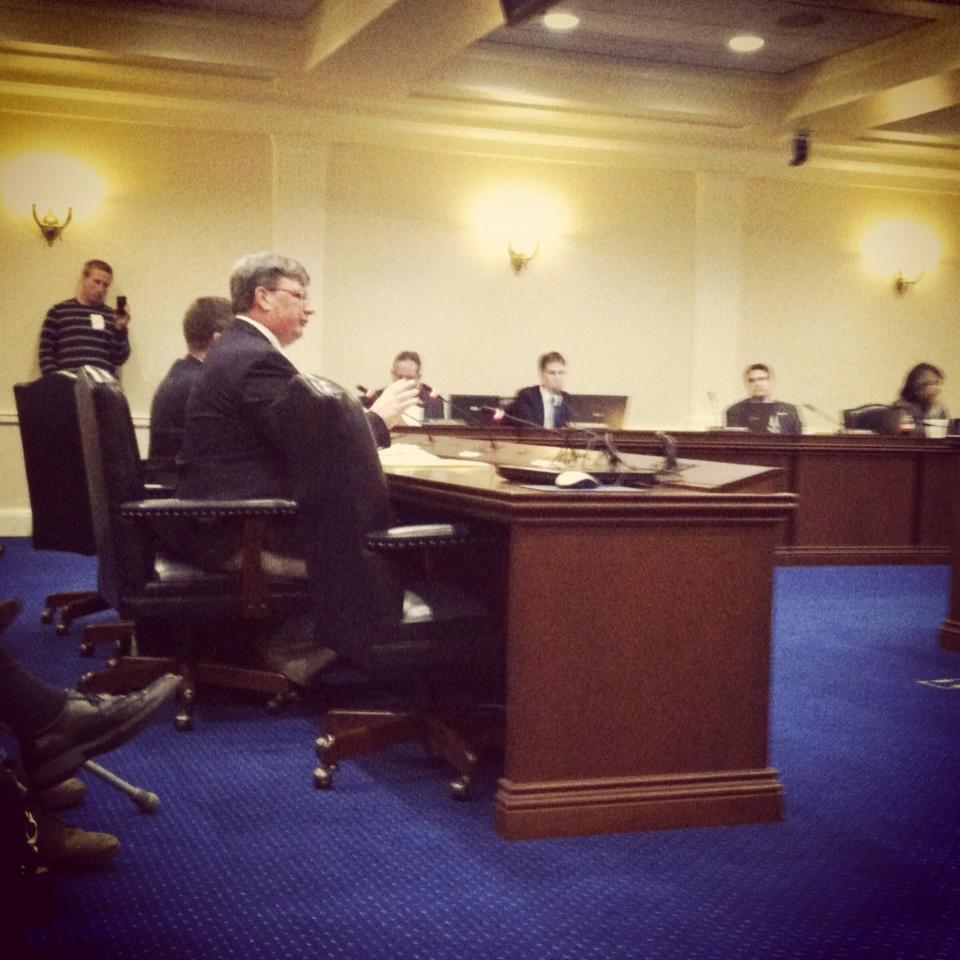 (In Ways and Means testifying with Delegate Fisher on HB-106)

We also heard from the Delmarva Poultry Industry (DPI) representatives who painted a very bleak picture of their industries status in Maryland. New House construction is not even close to meeting a sustainability number for the industry. Folks are still reporting 1-2 year wait times and delays for permit approvals. We heard from the banking side of industry which highlighted the damage to borrowing power done by last year’s Septic Bill (SB-236). When you contrast our decline with our neighboring states progress, it appears very unlikely that we can recover. The industry is expanding in Delaware at the same rate it is contracting in Maryland.

The Mayor’s Association was in town for meetings and we had Mayor Gee Williams from Berlin and Mayor Bruce Morrison along with his wife Laura in attendance at the meeting. I also had the privilege of being shadowed by Jack Fager who came with his mom Michelle from Ocean City to see Maryland government in action.