Lyndsay Lohan To Be Released From Jail........One More Time

A Beverly Hills judge on Friday had ordered the actor behind bars for a month after she failed a court-ordered drug test. But another judge reversed that order. 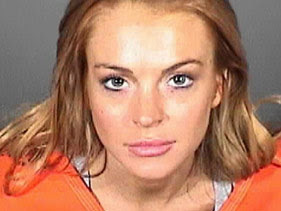 A Beverly Hills judge on Friday thought he had found a novel way to get around the Los Angeles County jail system's early-release policy with a ruling aimed at keeping Lindsay Lohan behind bars for the next month.

But just hours after the actress was handcuffed and brought to a Lynwood jail, another judge intervened, issuing an order that is expected to pave the way for Lohan's freedom this weekend.

At issue was Judge Elden Fox's decision to send Lohan back to jail without bail after she failed a court-ordered drug test. Lohan's attorney, Shawn Chapman Holley, complained that the judge was wrong to prohibit bail and filed an appeal. L.A. County Superior Court Judge Patricia M. Schnegg agreed with Chapman Holley and set bail at $300,000.
Several legal experts described Fox's decision to deny bail as highly unusual, particularly on what they considered a fairly minor drug case.

"She neither presents a danger to the community, nor is she a flight risk," said L.A. defense attorney Mike Cavalluzzi. "Those are the primary criteria for either denying bail or setting an appropriate amount of bail, especially given that this is a misdemeanor."

But others could not help but applaud Fox for attempting to enact serious punishment for Lohan after repeatedly defying the court. Veteran defense attorney Glen Jonas said the judge's actions effectively side-stepped the early-release process, which covers inmates sentenced to jail time but not to inmates awaiting sentencing.

"Judge Fox guaranteed Ms. Lohan will not receive early release by setting the hearing a month out with no bail. Judge Fox is fed up. Ms. Lohan is being treated like a drug addict on probation instead of a celebrity" with a drug issue, Jonas said.

Lohan has twice been sentenced to jail time, but in both instances she got out early because of overcrowding in the county's women's jail in Lynwood.

Instead of handing down a sentence against Lohan, Fox ordered her jailed without bail until an Oct. 22 hearing on whether she should be incarcerated for drug use. Fox wanted her to remain in jail for 30 days until her hearing.

Because of overcrowding, women convicted of crimes similar to Lohan's tend to serve about 25% of her sentence.

Fox said he postponed a final decision until October because needed further information from probation officials on Lohan's compliance before a revocation hearing could be held.

Lohan came to court with her strawberry blonde hair pulled back and wearing a dark business suit. She showed little emotion but appeared stunned when the ruling came down.

The scene was in sharp contrast with her previous court appearance, when she made a tearful plea for leniency before Judge Marsha N. Revel that was captured by live cameras and beamed around the globe.

The actress, best known for films including "Freaky Friday," "The Parent Trap," and "Mean Girls," also made news when cameras captured an expletive-laden message on her fingernails.

Revel, who was assigned the Lohan case before recusing herself from it, sentenced Lohan to 90 days in custody including 30 days in the county jail.

Lohan served less than one-third of her jail sentence and was released from an in-patient drug rehabilitation facility at Ronald Reagan UCLA Medical Center after 23 days.

Then last week, Lohan admitted on her Twitter feed that she had failed a drug test, setting the stage for the hearing Friday before Judge Fox.

Lohan's legal woes date back to 2007, when she was arrested twice over a three-month period for driving under the influence. She pleaded no contest and agreed to attend alcohol education classes.
www.latimes.com
Posted by jmmb at 8:00 AM No comments: